Writing Russia in the Age of Shakespeare 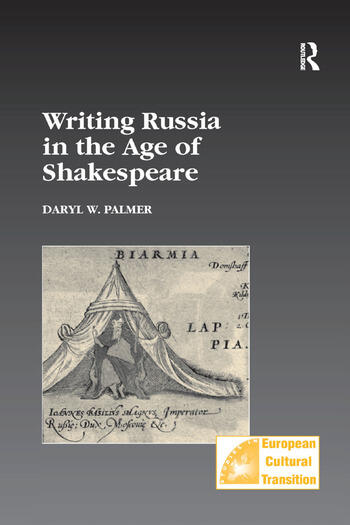 Writing Russia in the Age of Shakespeare

This study commences with a simple question: how did Russia matter to England in the age of William Shakespeare? In order to answer the question, the author studies stories of Lapland survival, diplomatic envoys, merchant transactions, and plays for the public theaters of London. At the heart of every chapter, Shakespeare and his contemporaries are seen questioning the status of writing in English, what it can and cannot accomplish under the influence of humanism, capitalism, and early modern science. The phrase 'Writing Russia' stands for the way these English writers attempted to advance themselves by conjuring up versions of Russian life. Each man wrote out of a joint-stock arrangement, and each man's relative success and failure tells us much about the way Russia mattered to England.

Contents: Preface; Inventing the venture: England and Russia at mid-century; Ivan IV, Elizabeth I, and the dispatch of Anthony Jenkinson; Writing the envoy: William Shakespeare's Love's Labour's Lost and the reasons against reading; Writing large: the case of Jerome Horsey, individualist; Writing ardor: the submissions of Giles Fletcher; 'With the Emperor of Russia': subjection and withdrawal in William Shakespeare's Measure for Measure; Imperial tyranny and the daughter's seclusion in William Shakespeare's The Winter's Tale; The King's Men's version of Muscovy: John Fletcher's The Loyal Subject; Epilogue: knowledge, permutation, and John Tradescant's Roses; Bibliography; Index.

Daryl W. Palmer is Associate Professor of English at Regis University, Denver, USA. He is the author of Hospitable Performances (1992) and articles dealing with early modern literature that have appeared in journals such as Shakespeare Quarterly and ELH.

'Palmer brings a wide, illuminating range of concerns to bear on Anglo-Russian relations, and his linkages, proposals, and stories are fascinating. Connecting English accounts of engagement with Russia to Russian-inflected plays by Shakespeare and Fletcher, he produces novel, important insights into the writings of two corporate bodies, the Russia Company and the King's Men. Of particular interest are the analyses of the former's 'household' organization in Russia...' Renaissance Quarterly 'In his very readable book [...] Palmer shows that an extended study is possible and necessary, providing a fresh perspective on works where references to Russia initially appear offhand.' Sixteenth Century Journal 'Drawing on an impressive store of materials (the book is a feast of vintage English), Palmer provides his reader with a discerning study of the mind and world of the early modern writer. Palmers's insights into how Russia figures in the literature of the period are often unexpected and, in the case of Shakespeare and especially John Fletcher, invaluable. Students of Russian letters will be grateful to Palmer for the novel perspectives his book opens on such familiar works as Kurbsky's History of the Grand Prince of Moscow and Pushkin's Andzhelo.' Slavic and East European Journal ’... the book must be saluted as a most welcome enterprise, adding considerably to our understanding of Shakespeare and of Anglo-Russian relations during his age.’ JahrbÃ¼cher fÃ¼r Geschichte Osteuropas ’... a fascinating account written in a lively and engaging style, with an abundance of carefully researched historical details. The strength of the book lies in according equal treatment to various genres and in promoting an interdisciplinary approach to the study of intellectual history... The book helps set the conceptual framework for exploring multilevel dialogues between texts, readers, and cultures; offers thoughtful analysis of some undeservedly marginalized texts; and inv