Women and Religion in the West
Challenging Secularization 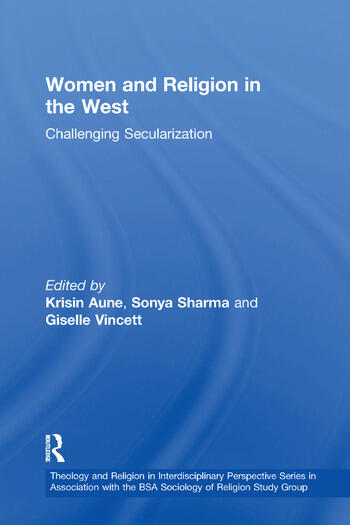 Women and Religion in the West: Challenging Secularization

What is the relationship between women and secularization? In the West, women are abandoning traditional religion. Yet they continue to make up the majority of religious adherents. Accounting for this seeming paradox is the focus of this volume. If women undergird the foundations of religion but are leaving in large numbers, why are they leaving? Where are they going? What are they doing? And what's happening to those who remain? Women and Religion in the West addresses a neglected yet crucial issue within the debate on religious belonging and departure: the role of women in and out of religion and spirituality. Beginning with an analysis of the relationship between gender and secularization, the book moves its focus to in-depth examination of women's experiences based on data from key recent qualitative work on women and religion. This volume addresses not only women's place in and out of Christianity (the normal focus of secularization theories) but also alternative spiritualities and Islam, asking how questions of secularization differ between faith systems. This book offers students and scholars of religion, sociology, and women's studies, as well as interested general readers, an accessible work on the religiosity of western women and contributes fresh analyses of the rapidly shifting terrain of contemporary religion and spirituality.

’... an excellent piece of academic work that will serve both as an impetus for further debate as well as a platform for future research. ... The volume brings together up-to-date research and raises significant theoretical issues on religion, gender and secularization.’ Nordic Journal of Religion and Society 'The primary contribution of the book lies in further empirically specifying the general insight that gender is a constructive aspect of how people as groups or as individuals are part of larger socio-historical developments such as secularization. Drawing upon women's voices and lived realities, it provides a well-founded critique of generalizing narratives about 'religion', 'secularism' and 'emancipation'. It also allows for comparative insights as the contributions are based upon the diverging experiences of women from various religious/secular, cultural, ethnic and national backgrounds. The book is therefore a must-read for those interested in comprehensive empirical accounts of the intersections between gender, religion, secularization and other 'markers' of sociopolitical differences.' Religion and Gender