War, Identity and the Liberal State
Everyday Experiences of the Geopolitical in the Armed Forces 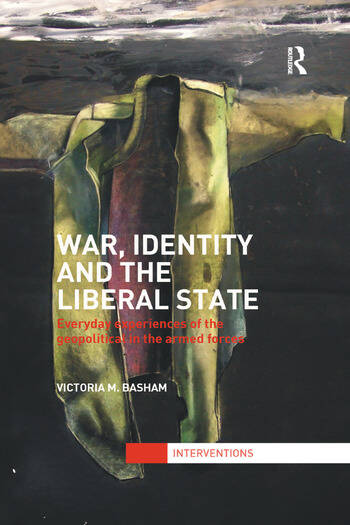 War, Identity and the Liberal State: Everyday Experiences of the Geopolitical in the Armed Forces

War, Identity and the Liberal State critically examines the significance of gender, race and sexuality to wars waged by liberal states and the soldiers who wage them. Drawing on original fieldwork research with British soldiers, it offers insights into how their lived experiences are shaped by, and shape, a politics of gender, race and sexuality that not only underpin power relations in the military, but a wider geopolitics of war. It explores how shared and collectively mediated knowledge on gender, race and sexuality facilitates certain claims about the nature of governing in liberal states and about why and how such states wage war against ‘illiberal’ ones in pursuit of global peace and security. In linking the politics of daily life to the international, this book insists that it is vital to explore how geopolitical events and practices are co-constituted, reinforced and contested in everyday experiences, practices and spaces. The book also urges scholars interested in the linguistic construction of geopolitics to consider the ways in which everyday objects, spaces and bodies also reinforce particular ideas about war, identity and statehood and some of their violent consequences.

This book will be of interest to students and scholars of international studies, security, gender and feminist studies and critical and social theory.

The Geopolitics of the Everyday in the Military  2. Towards a ‘History of the Present’  3. Intimacies of War and Gender  4. Forbidden Intimacies: Heteronormativity and Military ‘Values’  5. Imperial Encounters and the Structural Privileging of Whiteness  6. The March of Progress?

Victoria M. Basham is Senior Lecturer in Politics at the University of Exeter, UK. Her research focuses on issues of gender, race, class and sexuality in relation to militaries, militarism and militarization.

Victoria Basham opens windows onto the deeply masculinized world of today's British military. With refreshing candor, she reveals how the daily presumptions and mundane interactions of male and female military personnel shape fundamental notions of civilian authority, national defense and external threats. This is a book that will awaken a lively interest in gendered politics even for those who don't think they need to think about gender.

This fascinating and rich, field-based foray into the everyday life of the British military "at home" undermines  comfortable certainties about the nature of soldiering or of being a civilian. Basham demonstrates the political value of identifying the contradictions within the people deployed in the war system and the complexities of how its violence intersects with gender, race, and sexuality.

Basham's focused analysis of the vitality of everyday politics in the international not only provides a critical intervention into IR, but destabilizes the assumed identity of the liberal state's armed forces, bravely engaging the co-constitutive role of gender, race and sexuality.

This timely and provocative analysis explores the contingency of the liberal democratic state’s pursuit of war on the particular configurations of gender, sexuality and race expressed through the practices, policies and bodies of military forces.

Victoria Basham's War, Identity and the Liberal State offers a sophisticated and courageous exploration of the social life of organized violence. Moving deftly between the geopolitical and the intimate everyday of British military life, Basham provides precious insight into the human logistics of warfare.

Victoria Basham’s incisive investigations into the politics of the everyday uncover indispensable workings of geopolitics and reveal complex circulations of power and resistance through gender, sexuality, and race. This book is essential reading for anyone seeking a deeper understanding of what underwrites and what is at stake in the ‘liberal’ wars of our time.

Victoria Basham makes an important contribution to the critical understanding of the military in the context of the contemporary, biopolitical state. Drawing on extensive field work, she tells a compelling tale of the gendered, raced, and heteronormative nature of the contemporary military, even in our ever-more diverse Western societies. The text is theoretically sophisticated, empirically rich, and clearly and accessibly written, and will be a real benefit to both students and other researchers.

War, Identity & the Liberal State is a timely investigation of the ways that gendered, raced and sexualized identities are constituted in the British military. Drawing upon rich interviews and ethnography, Basham provides a reflexive and theoretically sophisticated account of how military personnel make sense of their own lives: how they take up, negotiate and even challenge normative social identities. The intimate violences that are inflicted in the military are thus laid bare. Yet rather than underscore their exceptionality, however, the book traces the co-constitution of civilian and soldier, the civil and the military, peace and war. In so doing, Basham effectively draws out the brutal continuities between the domestic protection of the liberal way of life and the justification for warfare abroad.

War, Identity and the Liberal State

is a path-breaking, theoretically sophisticated, historically grounded study of the everyday embodied practices of soldiers in the British military. Basham challenges mainstream scholarship by demonstrating the fundamental connection between the geopolitics of wars waged by liberal states and gendered, sexual and racial inequalities in everyday military life.