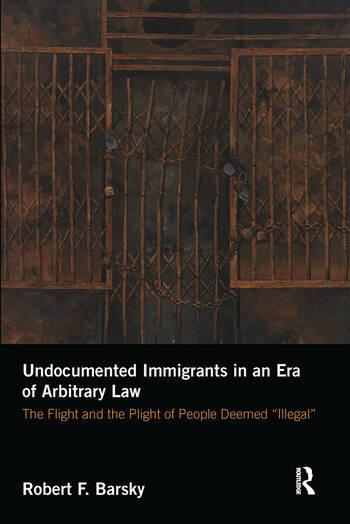 Undocumented Immigrants in an Era of Arbitrary Law: The Flight and the Plight of People Deemed 'Illegal'

This book describes the experiences of undocumented migrants, all around the world, bringing to life the challenges they face from the moment they consider leaving their country of origin, until the time they are deported back to it. Drawing on a broad array of academic studies, including law, interpretation and translation studies, border studies, human rights, communication, critical discourse analysis and sociology, Robert Barsky argues that the arrays of actions that are taken against undocumented migrants are often arbitrary, and exercised by an array of officials who can and do exercise considerable discretion, both positive and negative.

Employing insights from a decade-long research project, Barsky also finds that every stop along the migrant’s pathway into, and inside of, the host country is strewn with language issues, relating to intercultural communication, interpretation, gossip, hearsay, and the challenges of peddling of linguistic wares in the social discourse marketplace. These language issues are almost always impediments to anodyne or productive interactions with host country officials, particularly on the "front-lines" where migrants encounter border patrol and law enforcement officers without adequate means of communicating their situation or understanding their rights. Since undocumented people are categorized as ‘illegal’, they can be subjected to abuse and exploitation by host country officials, who can choose to either tolerate or punish them on the basis of unpredictable, changeable, and even illusory or "arbitrary" laws and regulations.

Citing experts at every level of the undocumented immigrant apparatuses worldwide, from public defenders to interpreters, Barsky concludes that the only viable policy to address prevailing abuses and inequalities is to move towards open borders, an approach that would address prevailing issues and, surprisingly, provide security and economic benefits to both host and home countries.

Introduction: Advocating For Those Who Suffer  1. Arbitrariness, Discretion and Nonenforcement  2. Translating the Utterances of Undocumented Immigrants in a Hostile Discourse Marketplace  3. ‘First Encounters’ with Host Country Officials  4. Entering the System, from the Arrest to Formal Sentencing  5. Incarcerations, Public and Private  Conclusion: Deportation, and Return to the Host Country? Or Open Borders?

Robert F. Barsky is a Professor at Vanderbilt University. He has published widely in areas relating to language theory, Convention refugee adjudication, and border studies, and he is the author of a trilogy of books about the milieus of Noam Chomsky and Zellig Harris.

"This richly investigated book will be eminently useful to a broad audience including scholars of critical discourse, legal studies, and migration as well as the general public. Barsky’s theoretical depth and approachable writing style would also make this book a valuable addition to academic syllabi for both undergraduate and graduate courses."
Stephanie Maher, Western Washington University, Border Criminologies

"Drawing on a broad array of academic studies, Barsky argues that in many countries, many actions that are taken against undocumented migrants are arbitrary—exercised by officials who can and do exercise considerable discretion, both positive and negative. These decisions are complicated by a situation where the migrant’s pathway into, and inside of, the host country is strewn with language issues relating to intercultural communication, interpretation, gossip, hearsay, and the challenges of peddling linguistic wares in the social discourse marketplace."
Law and Social Inquiry Journal