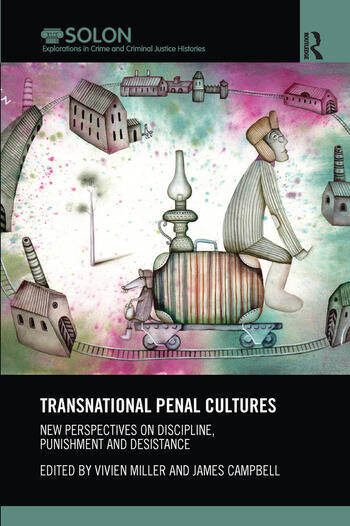 Focusing on three key stages of the criminal justice process, discipline, punishment and desistance, and incorporating case studies from Asia, the Americas, Europe, Africa and Australia, the thirteen chapters in this collection are based on exciting new research that explores the evolution and adaptation of criminal justice and penal systems, largely from the early nineteenth century to the present. They range across the disciplinary boundaries of History, Criminology, Law and Penology.

Journeying into and unlocking different national and international penal archives, and drawing on diverse analytical approaches, the chapters forge new connections between historical and contemporary issues in crime, prisons, policing and penal cultures, and challenge traditional Western democratic historiographies of crime and punishment and categorisations of offenders, police and ex-offenders.

The individual chapters provide new perspectives on race, gender, class, urban space, surveillance, policing, prisonisation and defiance, and will be essential reading for academics and students engaged in the study of criminal justice, law, police, transportation, slavery, offenders and desistance from crime.

Introduction, Vivien Miller and James Campbell  Part 1. Discipline  1. "Insufficiently Cruel" or "Simply Inefficient"? Discipline, Punishment and Reform in the Gold Coast Prison System, c. 1850-1957, Stacey Hynd  2. "Who’s really wicked and immoral, women or men?": Uneasy classifications, Hindu gender roles and infanticide in late nineteenth century India, Daniel J. R. Grey  3. At "war against our institutions": Cultures of Policing and Punishment in the Slave Cities of the Americas, James Campbell  4. "Thank goodness Habeas Corpus did not run in Nahud": Bifurcated Systems of Policing in Condominium Sudan, 1898-c.1956, Will Berridge  5. Policing in Hong Kong and Macau: Transformations from the Colonial Era to Special Administrative Regions, Lawrence Ka-Ki Ho  6. "A Holy Panic": Race, Surveillance and the Origins of the War on Drugs in Britain, 1915-1918, Sascha Auerbach  Part 2. Punishment  7. Austria’s Penal Colonies: Facts and Visions, Stephan Steiner  8. Punishment and Parade: The Cultural Form of Penal Exile in Russia, Laura Piacentini  9. "A perfect hell of misery": real and imagined prison lives in an "American Siberia", Vivien Miller  Part 3. Desistance  10. "What is a man that is a bolter to do? I would steal the Governor’s axe rather than starve": Old lags and recidivism in the Tasmanian penal colony, Hamish Maxwell-Stewart and Rebecca Kippen  11. On Licence: Understanding punishment, recidivism and desistance in penal policy, 1853-1945, David Cox, Barry Godfrey, Helen Johnston and Joanne Turner  12. "Whose prisoners are these anyway?" Church, state and society partnerships and co-production of offender "resocialisation" in Brazil, Fiona Macaulay  13. Recoverers Helping Recoverers: Discipline and Peer-Facilitated Rehabilitation in Brazilian Faith-Based Prisons, Sacha Darke.

Vivien Miller is Associate Professor of American and Canadian Studies at the University of Nottingham. She is the author of Hard Labor and Hard Time: Florida’s ‘Sunshine Prison’ and Chain Gangs (2012) and Crime, Violence and Sexual Clemency: Florida’s Pardon Board and Penal System in the Progressive Era (2000), and co-editor of Cross-Cultural Connections in Crime Fictions (2012). She is currently working on capital punishment in the pre-1972 United States.

James Campbell is Lecturer in American History at the University of Leicester. He is the author of Slavery on Trial: Race, Class and Criminal Justice in Antebellum Richmond, Virginia (2007) and Crime and Punishment in African American History (2012). He is currently working on a study of the death penalty in twentieth-century Jamaica.

‘This is a stimulating and timely collection which brings together wide-ranging contributions on historical penal cultures. What makes it particularly distinct is its interdisciplinarity; with contributors drawing on the social sciences, demography, post-colonialism and transnationalism to complement the historical evidence. The circulation of ideas about crime, criminal justice theory, and the practices and transfer of domestic and colonial regimes are key themes. I have no doubt that this collection is a major addition to the field of comparative history and to criminal justice history too.’ - Heather Shore, Reader in History, Leeds Metropolitan University, UK

‘Over the past three centuries, the prison has emerged as one of the most enduring and pervasive institutions of European imperial expansion. Transnational Penal Cultures describes how the global experience of imprisonment has connected different cultures, but challenges any complacent view that this experience has been uniform. The cases gathered here, based on new research and drawing upon a fascinating range of archival sources, take us from the penal colonies of Austria and Russia, to the faith-based prisons of Brazil.

Along the way, the penal reform theories of Foucault and Elias are found wanting. And while the prison is everywhere seen as a potent symbol of state authority and power, it is not reform but the practice of state violence that marks the penal cultures described in this volume. This book stands as an invigorating and significant contribution to the literature of histories of punishment.’ - David M. Anderson, Professor of African history, University of Warwick, UK