Transformations of Retailing in Europe after 1945 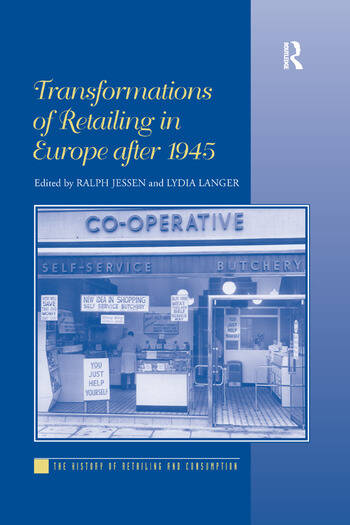 Transformations of Retailing in Europe after 1945

After World War II, structures, practices and the culture of retailing in most West European countries went through a period of rapid change. The post-war economic boom, the emergence of a mass consumer society, and the adaptation of innovations which already had been implemented in the USA during the interwar period, revolutionized the world of getting and spending. But the implementation of self-service and the supermarket, the spread of the department store and the mail order business were not only elements of a transatlantic catch up process of 'Americanization' of retailing. National patterns of the retail trade and specific cultures of consumption remained crucial, and long term processes of change, starting in the 1920s or 1930s, also had an impact on the transformation of retailing in post-war Europe. This volume presents a series of case-studies looking at transformations of retailing in several European countries, offering new insights into the structural preconditions of the emerging mass consumer societies and also into the consequences consumerism had on the practices of retailing.

Contents: Introduction: transformations of retailing in Europe after 1945, Ralph Jessen and Lydia Langer; Consumer society revisited: affluence, choice and diversity, Frank Trentmann; Part I Americanization of Retailing? The Introduction of Self-Service: The coming of the supermarket: the processes and consequences of transplanting American know-how into Britain, Gareth Shaw, Adrian Bailey, Andrew Alexander, Dawn Nell and Jane Hamlett; The long way to the supermarket: entrepreneurial innovation and adaptation in 1950s-1960s Italy, Emanuela Scarpellini; How West German retailers learned to sell to a mass consumer society: self-service and supermarkets between 'Americanization' and 'Europeanization', 1950s-1960s, Lydia Langer; Beyond self-service: the limits of 'Americanization' in post-war West German retailing in comparative perspective, Jan Logemann. Part II New and Old Places of Consumption: Automatic trade: self-service and the polycentric early history of slot machines, Angelika Epple; Mail order retailing in Britain since 1945: credit community and technology, Richard Coopey; What sex are sex shops? The retailing of erotica in West Germany before the legalization of pornography, Elizabeth Heinemann; 'Everything that exists in capitalism can be found in the department store': the development of department stores in the Federal Republic of Germany, 1949-2000, Ralf Banken. Part III Scientific Knowledge, Technical Innovations and the Retail Trade: Managing the unmanageable: the professionalization of market and consumer research in post-war Europe, Stefan Schwarzkopf; Irradiating fish - improving food chains. Retailers as mediators in a German innovation network? 1968-1977, Karin Zachmann; Cool alliances: freezers, frozen fish and the shaping of industry-retail relations in Norway, 1950-1960, Terje Finstad; The barcode revolution in German food retailing, Annika Menke; Index.

Ralph Jessen is Professor of Modern History and Lydia Langer was formerly a Research Fellow, both at the University of Cologne, Germany.

A Yankee Book Peddler UK Core Title for 2012 'Ralph Jessen and Lydia Langer have drawn together a collection of essays in this volume ... which collectively add to our knowledge of how self-service spread. ... This volume of essays will appeal to retail history specialists, in particular those with interests in postwar European (and particularly, but not only, German) developments.' Business History Review ’... una raccolta ricca di suggeÂ­stioni e stimoli, che è augurabile di veder ampiaÂ­mente discussa a livello internazionale.’ ['... a collection rich with suggestions and stimulating ideas, one which will hopefully be broadly discussed at international level.'] Ricerche di Storia Politica