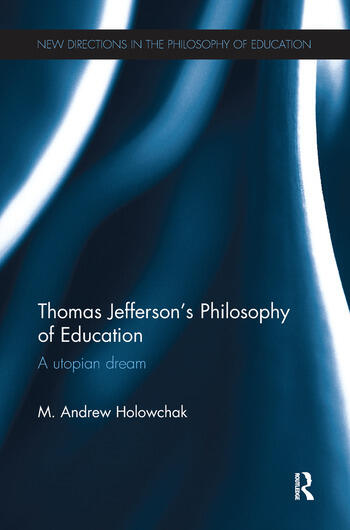 Thomas Jefferson had a profoundly advanced educational vision that went hand in hand with his political philosophy - each of which served the goal of human flourishing. His republicanism marked a break with the conservatism of traditional non-representative governments, characterized by birth and wealth and in neglect of the wants and needs of the people. Instead, Jefferson proposed social reforms which would allow people to express themselves freely, dictate their own course in life, and oversee their elected representatives. His educational vision aimed to instantiate a progressive social climate only dreamed of by utopists such as Thomas More, James Harrington and Louis-Sébastian Mercier.

This book offers a critical articulation of the philosophy behind Jefferson’s thoughts on education. Divided into three parts, chapters include an analysis of his views on elementary and higher education, an investigation of education for both the moral-sense and rational faculty, and an examination of education as lifelong learning. Jefferson’s educational rationale was economic, political and philosophical, and his systemic approach to education conveys a systemic, economic approach to living, with strong affinities to Stoicism.

will be key reading for philosophers, historians and postgraduate students of education, the history of education and philosophy.

Part 1: The Laborers and the Learned  A Crusade Against Ignorance: Educating the General Citizenry.  A Dialog between Ancients and Moderns: Creating a Natural Aristocracy  Part 2: The Heart and the Head  Fixing the Principles and Practices of Virtue: Educating the Heart.  I Feel: Therefore I Exist: Educating the Head  Part 3: Lifelong Education  An Education Directed to Freedom and Happiness: The Usefulness of "American" Education.  A Heart at Ease Flies to No Extremes: Life as a Sentimental Journey.

'Thomas Jefferson’s view on the importance of education and schooling has served as a foundation from which various curricular developments have derived and has also informed people on how to go about their lives at the conclusion of their formal education.  These ideas are expertly articulated in this book by Holowchak (Philosophy, Rider Univ.) ... Holowchak's distillation of Jefferson’s vision provides the reader with a succinct and powerful introduction to the wide range of Jefferson’s ideas, as well as the context in which they were developed. Summing Up: Highly recommended. Upper-division undergraduates and above.' – J.A. Helfer, Illinois State Board of Education, CHOICE, August 2015

‘Jefferson the dreamer, Jefferson the realist, or the complexity of a great mind is the theme of this insightful book by Holowchak. Or to paraphrase Jefferson's favorite novel by Laurence Sterne: he was always on a journey which is revealed herein.’ – Professor Richard Guy Wilson, Department of Architectural History, University of Virginia, USA

‘Written with engaging prose, Holowchak's vivid grasp of Jefferson's political and educational philosophy and his engagement with competing interpretations of Jefferson provide an outstanding historical synthesis of our third president's commitment to the republican canon. Holowchak brings to life Jefferson's crusade to institutionalize his educational ideals and his commitment to immersing subsequent generations with a civic virtue balanced by human reason and moral sensibilities. Holowchak's book is an exemplary work that will captivate readers and provoke debate among historians.’

‘Public education for all citizens was a lifelong goal of Thomas Jefferson and M. Andrew Holowchak has written a valuable addition to the available literature on this topic. In this book, Holowchak offers a consistent interpretation that stresses Jefferson’s philosophic foundation for his faith in education as a fundamental component of republicanism. This represents a different approach from most and in particular, he stresses Jefferson’s moral focus as a driving force in his educational thinking. Holowchak’s perspective is sure to generate a considerable "buzz" among scholars and general readers alike.’