The Politics of the Black Nation
A Twenty-five-year Retrospective 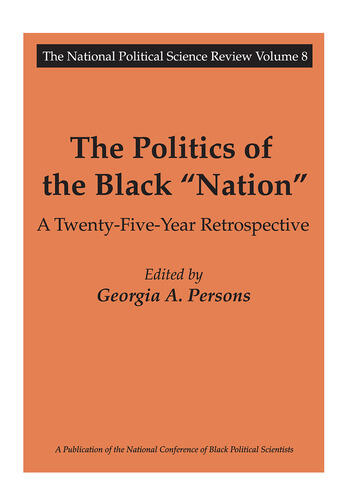 The Politics of the Black Nation: A Twenty-five-year Retrospective

This volume of the National Political Science Review, the official publication of the National Political Science Association, is anchored by a major symposium on The Politics of the Black "Nation," the book authored by Matthew Holden in 1973, which is now considered one of the most influential books in the field of black politics. Twenty-five years provide a sufficient timespan on which to base a retrospective of the book and simultaneously to reflect upon the evolution of the black liberation struggle, more formally called, African American politics. In the present age, there is not much talk about "a black nation," certainly not as was heard during the 1960s and mid-1970s. Yet there is a persistent sense of separateness in that there is constant thought and talk of "Black America" as a significantly separate communal entity. Black Americans are seen as a racially and culturally distinct community holding to social, political, economic interests which have special significance and poignancy for them. Holden's perception of the nature of the times in the early seventies stands in sharp contrast to how contemporary analysts of African American politics tend to perceive the nature of African Americans' role in political life and their position in American society in the present age. In this retrospective, readers have the opportunity to get a sense of what Holden argued of the seven essays that make up his seminal volume and to consider how well Holden's observations have stood the tests of time. In addition to the essays presented at the symposium, which pointedly discuss Holden's work, there are essays dealing with "African American Politics in Constancy and Change," by contributors including Charles Henry, David Covin, Robert C. Smith, Clyde Lusane, Cheryl Miller, D'Linell Finley, and Sekou Franklin, among others. Other features are a highly informative discussion of the Literary Digest magazine's Straw-Vote Presidential Polls, 1916-1936, and a review essay by Peter Ronaye in which he discusses "America as 'New World' Power: U.S. Foreign Policy in the Post-Cold War Era." The volume concludes with fifteen book reviews by knowledgeable scholars. The Politics of the Black "Nation" is a timely, thought-provoking volume. It will be of immense value to ethnic studies specialists, African American studies scholars, political scientists, historians, and sociologists.