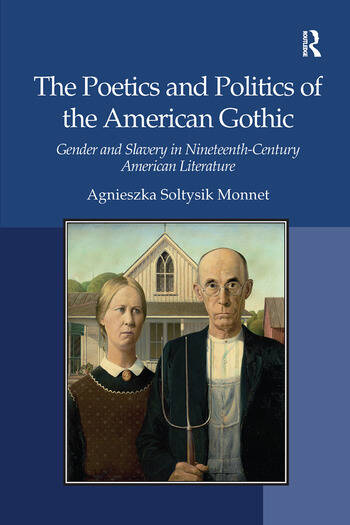 The Poetics and Politics of the American Gothic: Gender and Slavery in Nineteenth-Century American Literature

Taking as its point of departure recent insights about the performative nature of genre, The Poetics and Politics of the American Gothic challenges the critical tendency to accept at face value that gothic literature is mainly about fear. Instead, Agnieszka Soltysik Monnet argues that the American Gothic, and gothic literature in general, is also about judgment: how to judge and what happens when judgment is confronted with situations that defy its limits. Poe, Hawthorne, Melville, Gilman, and James all shared a concern with the political and ideological debates of their time, but tended to approach these debates indirectly. Thus, Monnet suggests, while slavery and race are not the explicit subject matter of antebellum works by Poe and Hawthorne, they nevertheless permeate it through suggestive analogies and tacit references. Similarly, Melville, Gilman, and James use the gothic to explore the categories of gender and sexuality that were being renegotiated during the latter half of the century. Focusing on "The Fall of the House of Usher," The Marble Faun, Pierre, The Turn of the Screw, and "The Yellow Wallpaper," Monnet brings to bear minor texts by the same authors that further enrich her innovative readings of these canonical works. At the same time, her study persuasively argues that the Gothic's endurance and ubiquity are in large part related to its being uniquely adapted to rehearse questions about judgment and justice that continue to fascinate and disturb.

Contents: Introduction; Unreliable narrators and 'unnatural sensations': irony and conscience in Edgar Allan Poe; 'Everywhere ... a cross - and nastiness at the foot of it': history, ethics, and slavery in Nathaniel Hawthorne's The Marble Faun; 'Thy catching nobleness unsexes me, my brother': queer knowledge in Herman Melville's Pierre; 'I was queer company enough - quite as queer as the company I received': the queer Gothic of Henry James and Charlotte Perkins Gilman; Bibliography; Index.

Agnieszka Soltysik Monnet is Assistant Professor of American Literature at the University of Lausanne, Switzerland.

"The progression of Monnet’s argument from the introduction through the four chapters offers a clear demonstration of how American Gothic literature destabilizes conventions. The engagement of gothic writers with contemporary political and social issues is also effectively argued, and it is the elucidation of this point particularly that makes Monnet’s study essential to current critical discussions about the function and significance of gothic literature and art." - Charlotte Fiehn, University of Cambridge, British Society for Literature and Science

'Monnet's study is deftly written. ... Monnet's study may prompt us to yearn for a still richer story about the associations and paths generated by this form in a longer and more culturally diverse literary history. ...[It] provides a crisp and useful challenge to our understanding of the gothic mode at a moment when literary study itself continues to "re-describe" its own narrative in contradictory, uneasy, and productive ways.' - NBOL-19

'This book displays thorough and impressive knowledge of the texts and of relevant criticism, and cultural background. It is critically sophisticated yet accessible, and a model of elegant clarity. Any scholar of American Gothic should know and will profit from Monnet's fine study.' - Gothic Studies

'Throughout this study, what Monnet does particularly well is to situate these texts within the history of their original reception, as well as the history of the more recent critical responses to them, pointing to blind spots in the critical readings of these texts. The connections she draws across a range of texts (particularly in the final chapter) are insightful, and this study does much to revive interest in the relatively under-studied ways that the gothic engages not merely in fanciful horrors, but the terrors of the real world.' - Review of English Studies

'The Poetics and Politics of the American Gothic is a well-researched study of five nineteenth-century writers who ’share a concern with the political and ideological debates of their time,’ often ’indirectly’ expressed (27). Monnet maintains an effective balance between her readings of the texts, a critical awareness, and her own rich questions, claims, and theoretical framework...' - Notes and Queries