The Philosophy of Giambattista Vico 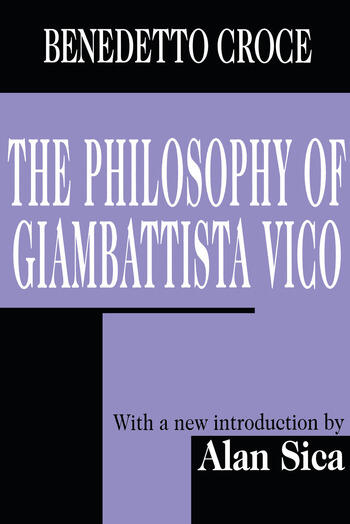 The Philosophy of Giambattista Vico

With a new introduction by Alan Sica.

Giambattista Vico (1668-1744) is often regarded as the beleaguered, neglected genius of pre-Enlightenment Naples. His work-though known to Herder, Coleridge, Matthew Arnold, and Michelet-widely and deeply appreciated only during the twentieth century. Although Vico may be best known for the use James Joyce made of his theories in Finnegans Wake, Croce's insightful analysis of Vico's ideas played a large role in alerting readers to his unique voice. Croce's volume preceded Joyce's creation of "Mr. John Baptister Vickar" by a quarter century.

During the last 25 years Vico's ideas about history, language, anti-Cartesian epistemology, and rhetoric have begun to receive the recognition their admirers have long claimed they deserve. Increasing numbers of publications appear annually which bear the stamp of Vico's thinking. Even if he is not yet so renowned as some of his contemporaries, such as Locke, Voltaire, or Montesquieu, there are good reasons to believe that in the future he will be equally honored as a cultural theorist. As a theorist of historical process and its language, there is no more innovative voice than his until the twentieth century-which explains in part why such figures as Joyce and R.G. Collingwood freely drew on Vico's work, particularly his New Science, while creating their own. If Vico was Naples' most brilliant, if uncelebrated, citizen prior to the Enlightenment taking hold in Southern Italy, then Croce (1866-1952) is surely the city's most important thinker of modern times, and the single indispensable Italian philosopher since Vico's death. When a genius of Croce's interpretative prowess, evaluates the work of another, it is inevitable that an explosive mixture will result.

A great virtue of this book is its fusion of Croce's unique brand of idealism and aesthetic philosophy with Vico's epistemological, ethical, and historical theories. If Vico's theory of cyclical changes in history, the corsi e ricorsi, remains fruitful, it might be argued that Croce's evaluation of his countryman' ideas represented the next turn of the philosophical wheel toward enlightenment.