The Ordeal of Peace
Demobilization and the Urban Experience in Britain and Germany, 1917–1921 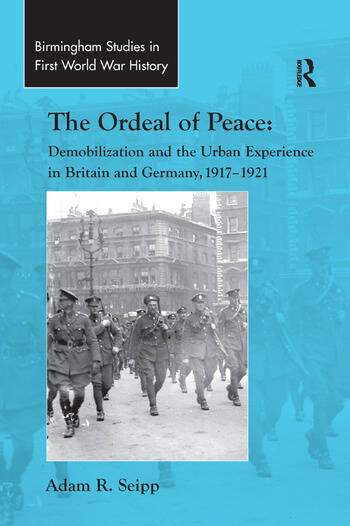 The Ordeal of Peace: Demobilization and the Urban Experience in Britain and Germany, 1917–1921

Historians know a great deal about how wars begin, but far less about how they end. Whilst much has been written about the forces, passions, and institutions that mobilized societies for war and worked to sustain that mobilization through years of struggle, much less is known about the equally complex processes that demobilized societies in the wake of armed conflict. As such, this new book will be welcomed by scholars wishing to understand the effects of the Great War in its fullest context, including the reactions, behaviors, and attitudes of 'ordinary' Europeans during the tumultuous events of the years of demobilization. Taking a transnational perspective on demobilization this study demonstrates that the experience of mass industrial war generated remarkably similar pressures within both the defeated and victorious countries. Using as examples the important provincial centres of Munich and Manchester, this book examines the experiences of European urban-dwellers from the last year of the war until the early 1920s. Utilizing a wide variety of sources from more than twenty archives in Germany, Britain, and the United States, this book recovers voices from the period that are often lost in conventional narratives, capturing the richness and diversity of the ideas, visions, and conflicts engendered by those difficult and tumultuous years. The result is a book that paints a vivid picture of the difficulties that peace could bring to economies and societies that had rapidly and fully adapted to the demands of industrial world war.

Contents: Introduction: Munich, Manchester, and the demobilization of Europe. 1917-1921; Manchester. Munich, and urban Europe in 1914. Section I Visions of the End: 1917-18 and the Beginnings of Demobilization: 'Do something!': Manchester in transition and war, 1917-18; An immeasurable sacrifice of blood and treasure: Munich at war, 1917-18. Section II 'The Man Afterwards Changed Completely': Demobilizations, Homecomings, and Transformations: 'The fabric of Europe and the world was being remade': the Armistice and after in Manchester; 'We don't want gratitude, we want our rights': demobilization, violence, and politics in Munich, 1919. Section III 'The Dregs of this Bitter Chalice': Crisis and the End of Demobilization, 1920-1921: 'Ordeal by peace': Manchester 1920-21; Scapegoats for a lost war; the crisis of demobilization in Munich, 1920-21; Conclusion: ending and beginning again; Bibliography; Index.

’The Ordeal of Peace is a monument to careful scholarship... Seipp has produced an admirable work that not only broadens our understanding of demobilization, but also shows the promising possibilities for transnational comparisons of urban experiences in war or peace.’ Urban History 'This book is thoroughly researched and makes use of a wide variety of archival and published sources... Seipp’s perspective on the ways that wartime institutions and cultures influenced the post-war years is a welcome addition to the field of First World War studies and deserves a wide readership.' European History Quarterly