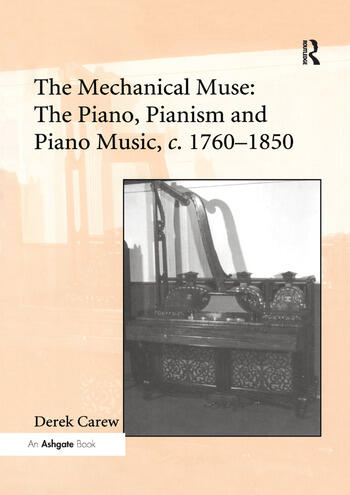 This book charts the piano's accession from musical curiosity to cultural icon, examining the instrument itself in its various guises as well as the music written for it. Both the piano and piano music were very much the product of the intellectual, cultural and social environments of the period and both were subject to many influences, directly and indirectly. These included character (individualism), the vernacular ('folk/popular') and creativity (improvisation), all of which are discussed generally and with respect to the music itself. Derek Carew surveys the most important pianistic genres of the period (variations, rondos, and so on), showing how these changed from their received forms into vehicles of Romantic expressiveness. The piano is also looked at in its role as an accompanying instrument. The Mechanical Muse will be of interest to anyone who loves the piano or the period, from the non-specialist to the music postgraduate.

Dr Derek Carew is from the Department of Music at Cardiff University, UK.

'The Mechanical Muse is a valuable vade-mecum for piano students and enthusiasts alike. In addition to explaining the mechanics of the instrument as it developed from its beginnings to achieve huge popularity in the nineteenth century, Carew covers a broad sweep of repertoire, including both canonic and lesser-known works by a host of composers. Illustrated with copious musical examples taken from various genres, and placing the instrument and its music in period context with reference to contemporary art and literature, The Mechanical Muse draws its audience into the fascinating world of the complex instrument that is the piano.' Dorothy de Val, York University, Canada ’... the writing is clear and wide-ranging... an extremely informative read...’ Piano Professional ’Derek Carew’s encyclopaedic work is ... a first step towards a syncretic approach to the piano’s history. ... This is a manual for a large community of readers: from students to teachers, from pianists to scholars, all of whom will find pleasure in looking things up in the exhaustive index, rich bibliography and the fascinating series of plates, tables and figures. ... Carew’s manual is more than simply an up-to-date book about the history of the piano: it is an inextinguishable source of information, which also provides fresh views on pianists and their repertory.’ Early Music