The Discretionary Economy
A Normative Theory of Political Economy 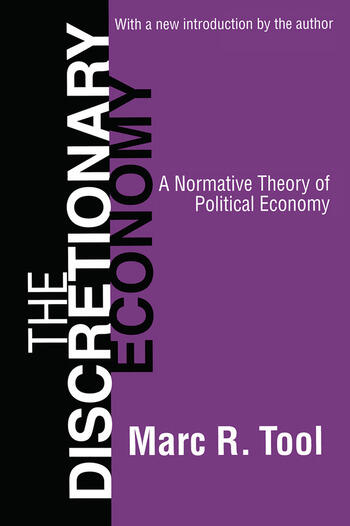 The Discretionary Economy: A Normative Theory of Political Economy

The Discretionary Economy argues that we do in fact control our own political and economic destinies. As a community, we have discretion over policies that determine whether an economic process adequately provides for the necessities of life. We also determine who participates in normative public judgments and whether decisions distinguish between what is and what ought to be. Tool argues that we must continuously organize the institutional structures through which economic and political functions in the social process are carried on. We must exercise discretion by creating and modifying institutions that coordinate our behavior.

To exercise discretion effectively requires that we employ distinctively American economic, political, and philosophical theory. In this volume, the pivotal twentieth-century contributors to this encompassing theory of political economy are Thorstein Veblen, John Dewey, Clarence Ayres, and R. Fagg Foster. This volume presents, in detail, their analytical and philosophical perspective on social change. A major purpose of this volume is to compare and contrast the American tradition with the traditions of capitalism, Marxism, and fascism, demonstrating that the former can resolve compelling economic and political problems and the latter two cannot.

This book explains how to identify and analyze social, economic, and political problems confronted in all communities, and how to go about framing and implementing structural adjustments in the political economy. It will be of interest to students in non-traditional courses in political economy including institutional economics, contemporary social problems, economics and social policy, methodology, and contemporary economic thought.