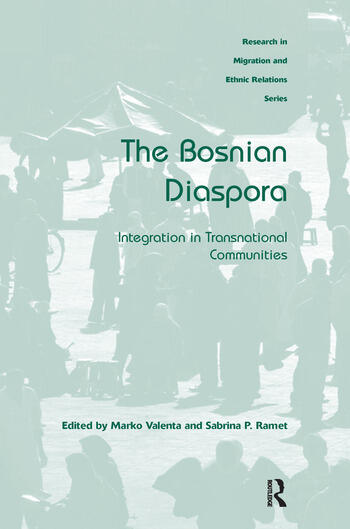 The Bosnian Diaspora: Integration in Transnational Communities provides a comprehensive insight into the situation of the Bosnian Diaspora, including not only experiences in 'western' countries, but also the integration experiences of Bosnian migrants in neighbouring territories, such as Croatia, Serbia and Slovenia. The book presents the latest trans-national comparative studies drawn from the US and Australia as well as countries across Europe, to explore post-crisis interactions among Bosnians and the impact of post-conflict related migration. Examining the common features of the Diaspora, including the responses of migrants to changes within Bosnia and the position of displaced people in both Bosnian society itself and local political discourses, this volume addresses the influence of global anti-Muslim rhetoric on the Bosnian Diaspora's self-identification and refugees' relationships to their home country. The extent to which refugees and returnees can be described as agents of globalization and social change is also considered, whilst addressing the issue of Bosnian integration into various receiving countries and the influence exercised by European reception policies on receiving nations outside Europe. An extensive exploration of a major post-conflict European Diaspora, this book will appeal to those with interests in migration, ethnicity, integration and the displacement effects of Yugoslav conflicts.

'In this excellent collection of articles on Bosnian migrants, the authors illustrate the complex processes of boundary drawing that take place as those who have left their country of origin negotiate the terms of integration into receiving countries while often forging transnational links with the homeland. Essential reading for anyone interested in the linkage between political conflict and migration.' Peter Kivisto, Augustana College, USA and University of Turku, Finland 'Empirically excellent and analytically compelling on the emergence of a modern worldwide diaspora group and its struggle for acceptance, this book substantially broadens our understanding of the complex migration process. It vividly describes how Bosnians are being culturally, politically and economically shaped by host societies’ realities, but also how Bosnians are affecting their "new homelands".' Nihad Bunar, Stockholm University, Sweden 'Overall this collection provides the reader with food for thought about productive ways to theorize ethnicity through processes of boundary making in a way that disentangles analysis from the enduring legacy of discrete and observable entities, but also ways of assessing the value of transnationalism as a conceptual tool. The contribution of original empirical studies on the Bosnian diaspora in a variety of diverse locales is a welcome addition to the small body of Literature... the wealth of data and insight contained in its pages make it a valuable ethnographic and conceptual contribution to contemporary scholarship on transnationalism, diaspora and post-Yugoslav diasporas.' SÃ¼dosteuropa '... a welcome follow-up volume to a large research output on the Bosnian war and refugee outflows that was published from the mid-1990s to the early 2000s... overall this is a useful, accessible, interesting, and diverse volume.' Contemporary Sociology 'This book presents the first comprehensive analysis of the integration and transnationalism of the Bosnian dia