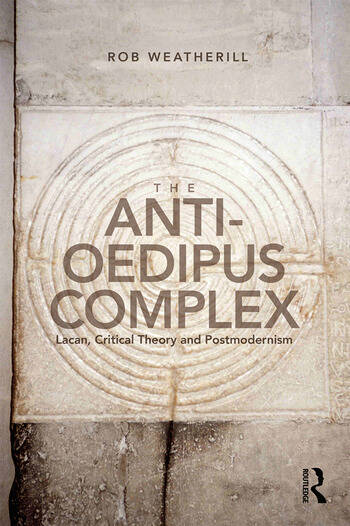 The Anti-Oedipus Complex critically explores the post-‘68 dramatic developments in Freudo-Lacanian psychoanalysis and cultural theory. Beginning with the decline of patriarchy and the master, exemplified by Freud’s paean for the Father, the revolutionary path was blown wide open by anti-psychiatry, schizoanalysis and radical politics, the complex antinomies of which are traced here in detail with the help of philosophers such as Nietzsche, Baudrillard, Levinas, Steiner, Žižek, Badiou, Derrida and Girard, as well as theologians, analysts, writers, musicians and film makers.

In this book, Rob Weatherill, starting from the clinic, considers the end of hierarchies, the loss of the Other, new subjectivities, so-called ‘creative destruction’, the power of negative thinking, revolutionary action, divine violence and new forms of extreme control. Where does this leave the psychoanalytic clinic – adrift in postmodern indifference? Does the engagement of the Radical Orthodoxy movement offer some hope? Or should we re-situate psychoanalysis within a ‘genealogy of responsibility’ (Patočka / Derrida) as it emerges out of the sacred demonic, via Plato and Christianity?

will be of interest to psychoanalysts, psychotherapists, counsellors, social workers and scholars in critical theory, philosophy, cultural theory, literary theory and theology.

Acknowledgements Preface 1. Wanted: The Father Dead or Alive 2. The Anti-Oedipeans 3. Becoming Versus Being 4. Even your Dreams are Police Records 5. Zizek: Silence and the Real Desert 6. The Power of Negative Thinking: Analysis against Therapy 7. Translation and Interpretation 8. New Subjectives in the Virtual World: Implications for Practice 9. From the Greatest Good to the Dunce’s Cap and Revolutionary Subjectivity 10. Materialism or Magisterium Afterword References Index

"Oedipus is dead and we have killed him. From Freud’s dreamwork to Krautrock and Kraftwerk, Rob Weatherill unfolds the consequences of our post 60s anti-Oedipal impulses, our excess of hate over love and our very indifference to that state. With fearless intellect it poses the question: is it possible to live and thrive outside the Oedipal frame altogether? This is a passionate apologetic for psychoanalysis over therapy, a sophisticated cultural and critical history of the Left, a damning indictment of the market driven imperative to enjoy at any expense, and a curiously theological work. Brimming with insight, wit and a depth of learning, our masters may be dead, but Weatherill shows himself to be every bit the master in a world without a compass."-Dr Marcus Pound, Senior Lecturer in Catholic Studies, Dept. Theology & Religion, Durham University.

"This is an impassioned and compelling work which reads key psychoanalytic and philosophical texts to offer an against-the-grain analysis of contemporary culture – of value to scholars, clinicians and sophisticated students interested in the continuing legacies of Jaques Lacan, Gilles Deleuze, and Félix Guattari among others."-Dr Julie Walsh, University of Warwick, author of Narcissism and Its Discontents (Palgrave, 2015).

"The Anti-Oedipus Complex, his extraordinary new work, diagnoses a western culture blighted with anomie and desolation, and asks if anything can halt "the final seemingly unstoppable victory of the inhuman." -Rob Doyle, The Irish Times