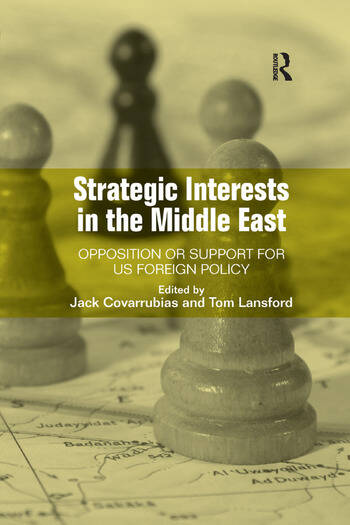 Strategic Interests in the Middle East: Opposition or Support for US Foreign Policy

As a cultural centre for Islamic interests across the world and as a focus point for increasing levels of economic and security interdependence, the Middle East remains a stage on which international politics will be played for the foreseeable future. This comprehensive study looks at the important international and regional actors and their interaction with, and reaction to, US foreign policy toward the region. The volume elucidates the trends in great power interest and interaction in the Middle East and studies the impact of the United States as the region's foremost military power. It highlights the changing nature of actors' relationships with the US and each other as their interests and policies evolve in response to changes in the region. Scholars, graduate and undergraduate students and the interested public will find this volume a useful guide and an ideal companion work for courses on the Middle East, US foreign policy and international security issues.

'...a cohesive and seamless collection of readings from an array of scholars that examines both historical and emerging conditions, policies, and actors in the region and comes highly recommended. Strategic Interests in the Middle East manages to succinctly identify, explore, and explain the interactions with, and reactions to, U.S. foreign policy in the region by a number of nations in Europe, Asia, and the Middle East, and does so in an engagingly well written, balanced effort. The book is an ideal supplemental text for courses in international relations, international security studies, and U.S. foreign policy, and is suitable for upper-division undergraduates and graduate students.' Robert P. Watson, Florida Atlantic University, USA '...this book is timely. In a single volume, the editors provide a valid, readable, and up-to-date account of actors that have shaped the Middle East inclusive of states with long-standing cultural, historic, and colonial ties to the Middle East as well as emerging economic and military powers. Woven throughout the work is the underlying theme of security interdependence and economic stability. The chapters offer sophisticated, and often nuanced, interpretations of the relationships of these essential actors with the region, yet the writing is approachable to the lay reader and academic alike.' Joshua G. Behr, Old Dominion University, USA 'Overall, a timely look and useful for those interested in international relations, international security studies and US foreign policy. Recommended.' Choice