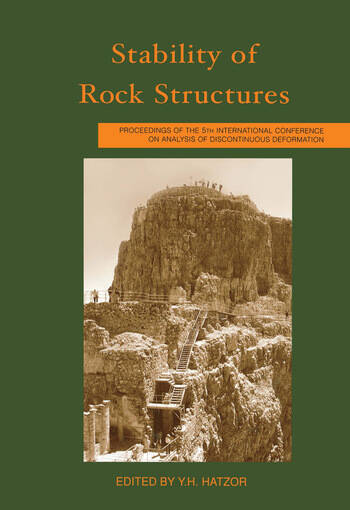 Geological materials are inherently discontinuous because of joints, faults, shears, bedding, and foliation planes which typically transect the rock mass. Over the past two decades enormous effort has been made by the rock mechanics community to quantify the characterization of rock structure by developing better geo-statistical tools and by developing more general constitutive laws for the mechanical strength of discontinuities. Along with these developments a substantial effort has been made to develop better and more suitable numerical methods, which allow realistic modelling of discontinuous deformation in geological materials. In particular, the discrete element method (DEM), the combined discrete-finite element methods (FEM/DEM), and discontinuous deformation analysis (DDA) have reached a mature development stage.

It is believed that the collection of papers in this volume demonstrates the directions in which theoretical developments in analysis of discontinuous deformation should proceed, the validity and limitations of existing codes, and the range of engineering problems to which discontinuous  analysis can be applied.