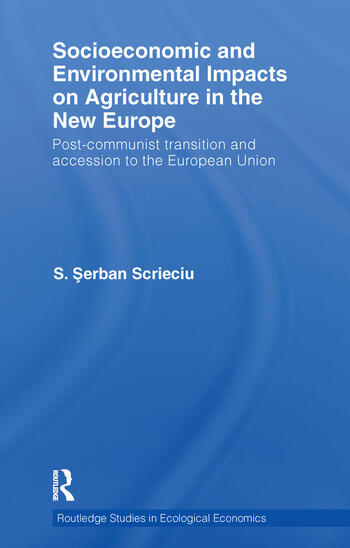 Socioeconomic and Environmental Impacts on Agriculture in the New Europe: Post-Communist Transition and Accession to the European Union

This book looks at agriculture and the environment, placed within the dynamic context of post-communist societal change and entry into the European Union (EU). Scrieciu explores developments in eleven Central and Eastern European (CEE) countries and argues for agriculture’s natural place in these societies. The history of these countries is significant in how it has shaped the institutions and influenced the outcomes.

In many cases, during communism, agriculture was not considered a strategic branch for a nation's development. An ecological consciousness did not figure high on the agendas of authoritarian regimes. After 1990, some post-communist farm economies progressed slower than others, and environmental pressures mostly diminished with agricultural restructuring. In parts of CEE, increases in numbers of low-input small farms have resulted in some, though largely unintended, ecological benefits. A dual environmental challenge has nevertheless surfaced. On one hand, environmentally unsustainable practices have been attributed to some low-input farming. On the other hand, risks of farm over-intensification and resource overexploitation are on the rise. Also, environmental regulatory and institutional frameworks are not always effectively in place.

EU membership is not creating the anticipated benefits for farm growth. There are a number of systemic structural barriers preventing many farmers from drawing on Common Agricultural Policy incentives and support. The presence of many vulnerable poor farms is clearly problematic, particularly economically. However, small-scale farms could be made more acceptable and profitable by ensuring EU policies acknowledge their value and by building institutions to support alternative farm growth strategies, aside from the traditional European model of individual corporate farm expansion. The voluntary uptake of grassroots rural cooperation and farm associations may represent such an alternative. Future European farm policy reforms need to reach the small and vulnerable, and better tackle issues of farm equity, poverty, and agricultural sustainability in the new Europe. This is a timely contribution as this type of "transition" has just begun. This book should be of use to students and researchers looking at agricultural and environmental economics, post-communist rural societal change, European integration and the Common Agricultural Policy. It may be also useful and of high relevance to policy analysts and those involved in agricultural and rural development policy-making in the region or in other countries facing similar problems.

S. Şerban Scrieciu is an economist with interests in sustainable development futures with applications particularly related to agricultural transformations and climate change. He is currently a project manager on climate economics at the United Nations Environment Programme in Paris, France.

'...excellent work and interesting book… includes a great account of how to make small scale farms acceptable and profitable'

'...offers a very useful perspective which I have not seen elsewhere'

'...the author makes an insightful analysis of the potential evolution of agriculture-environment interactions... Additionally, the author offers an astute discussion on the future of small scale farming in the new EU member states'