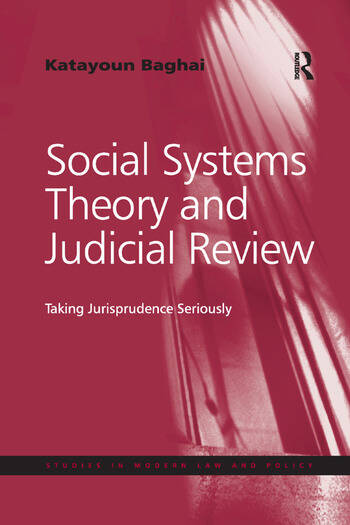 This book demonstrates the empirical gains and integrative potentials of social systems theory for the sociology of law. Against a backdrop of classical and contemporary sociological debates about law and society, it observes judicial review as an instrument for the self-steering of a functionally differentiated legal system. This allows close investigation of the US Supreme Court’s jurisprudence of rights, both in legal terms and in relation to structural transformations of modern society. The result is a thought-provoking account of conceptual and doctrinal developments concerning racial discrimination, race-based affirmative action, freedom of religion, and prohibition of its establishment, detailing the Court’s response to boundary tensions between functionally differentiated social systems. Preliminary examination of the European Court of Human Rights’ privacy jurisprudence suggests the pertinence of the analytic framework to other rights and jurisdictions. This contribution is particularly timely in the context of increasing appeals to fundamental rights around the world and the growing role of national and international high courts in determining their concrete meanings.

Katayoun Baghai is a FRQSC post-doctoral fellow and a visiting scholar at the Department of Law, Queen Mary University of London. She holds a doctorate in Sociology from McGill University, Montréal.

'This book leads sociological discovery where no social scientist has ever dared to go before and presents legal analysis that is highly relevant for lawyers. The author applies social systems theory to show that judicial decision-making in the Supreme Court cannot be understood fully without reference to the legal system. Examining cases before the Court on the issues of racial exclusion and inclusion, religion, and privacy the study demonstrates how the Court rather than grounding legal distinctions in something outside the law manages to justify its decision as valid and required by law. In this way, judicial review emerges as the driver of the legal system. Each chapter leads to the inescapable conclusion that it is not the justices but the law itself that makes the law.’

'The book proposes an unparalleled account of Niklas Luhmann’s social systems theory as applied to the legal system of modern societies. In her review of US Supreme Court’s rulings in fundamental rights cases over the last century, the author dwells on the function of jurisprudence and judicial review in the operational closure of the legal system. The text also exposes how the realist theories that flourished in American legal scholarship have failed to explain the role played by rules and precedents in judicial decision-making. This book is a must-read for anyone wishing to understand how law, not politics or morality, dictates judicial reasoning.’

"The author specifically explores variations in US Supreme Court jurisprudence of constitutional provisions regarding freedom and equality while identifying how the Court creatively justifies its decision-making. The result is a fascinating sociology of juridical review that is simultaneously well argued, empirically grounded, and anti-reductionist."