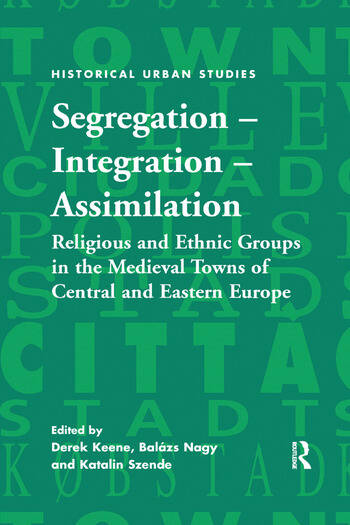 Segregation – Integration – Assimilation: Religious and Ethnic Groups in the Medieval Towns of Central and Eastern Europe

There is a widespread concern today with the role and experiences of ethnic and religious minorities, and their potential for conflict and harmony with 'host communities' and with each other, especially in towns. Interest in historical aspects of these phenomena is growing rapidly, not least in studies of the long and complex history of the towns of Central and Eastern Europe. Most such studies focus on particular places or on particular groups, but this volume offers a broader view covering the period from the tenth to the sixteenth century and regions from Germany to Dalmatia and from Epirus to Livonia, with an emphasis on the territory of medieval Hungary. The focus is on the changing nature of identity, perception and legal status of groups, on relations within and between them, and on the ways in which these elements were affected by the external political regimes and ideologies to which the towns were subjected. Many of the places examined were notable for the complexity of their ethnic and religious composition, and for their exposure to a wide range of external influences, including long-distance trade and tensions between settled and semi-nomadic ways of life. Overall the volume illustrates the variety of ways in which minorities found a place in towns - as citizens, outsiders, or in some other role - and how that could vary according to local circumstances and over time. Dealing with the formative period for modern European towns, this volume not only reveals much about medieval society and urban history, but poses questions still relevant today.

Derek Keene is Honorary Fellow and Professor at the Institute of Historical Research, University of London.

Katalin Szende is Associate Professor in the Department of Medieval Studies at the Central European University.