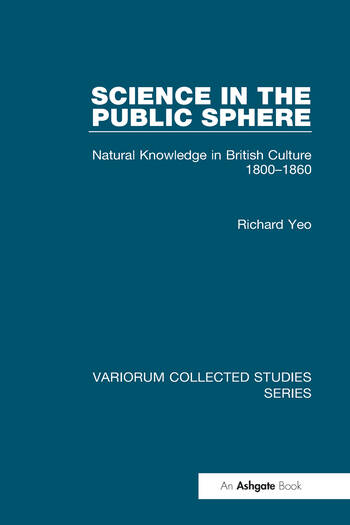 Science in the Public Sphere: Natural Knowledge in British Culture 1800–1860

The common focus of the essays in this book is the debate on the nature of science - often referred to by contemporaries as ’natural knowledge’ - in Britain during the first half of the 19th century. This was the period before major state support for science allowed its professionalization; indeed, it was a time in which the word ’scientist’ (although coined in 1833 by William Whewell) was not yet widely used. In this context, the questions about the nature of science were part of a public debate that included the following topics: scientific method and intellectual authority, the moral demeanour of the man of science, the hierarchy of specialised scientific disciplines, and the relation with natural theology. These topics were discussed both within scientific circles - in correspondence and meeting of societies - as well as in the wider public sphere constituted by quarterly journals and encyclopaedias. A study of these debates allow us to see how British science of this period began to cast loose some of its earlier theological supports, but still relied on a moral framework to affirm its distinctive method, ethos and cultural value.