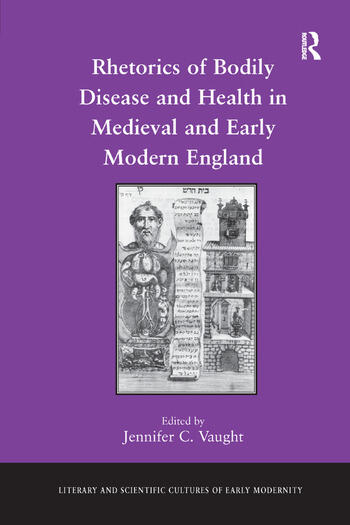 Susan Sontag in Illness as Metaphor and AIDS and Its Metaphors points to the vital connection between metaphors and bodily illnesses, though her analyses deal mainly with modern literary works. This collection of essays examines the vast extent to which rhetorical figures related to sickness and health-metaphor, simile, pun, analogy, symbol, personification, allegory, oxymoron, and metonymy-inform medieval and early modern literature, religion, science, and medicine in England and its surrounding European context. In keeping with the critical trend over the past decade to foreground the matter of the body and the emotions, these essays track the development of sustained, nuanced rhetorics of bodily disease and health ” physical, emotional, and spiritual. The contributors to this collection approach their intriguing subjects from a wide range of timely, theoretical, and interdisciplinary perspectives, including the philosophy of language, semiotics, and linguistics; ecology; women's and gender studies; religion; and the history of medicine. The essays focus on works by Dante, Chaucer, Spenser, Shakespeare, Donne, and Milton among others; the genres of epic, lyric, satire, drama, and the sermon; and cultural history artifacts such as medieval anatomies, the arithmetic of plague bills of mortality, meteorology, and medical guides for healthy regimens.

Jennifer C. Vaught is Jean-Jacques and Aurore Labbé Fournet / Board of Regents Professor of English at the University of Louisiana at Lafayette, USA.

'Bringing together scholars from an admirably wide range of disciplines, historical periods, and approaches, this collection repeatedly illuminates the ways that medieval and early modern writers translated bodily experiences into language. By focusing on the inter-related rhetorics of health and illness, the authors underscore how language is the necessary medium through which the pleasures, pains, and anxieties of the body are grudgingly revealed.' Michael Schoenfeldt, University of Michigan, USA 'Jennifer Vaught is to be congratulated on producing a fascinating, well-coordinated collection of essays by authors ranging from established experts to scholars embarking on promising careers. Her incisive introduction places the subsequent essays in relationship with the book’s overarching themes and each other, and begins with her own original contribution, supported by fascinating illustrations that deserve wider exposure... She also provides a substantial bibliography and index, features that will enhance the book’s value for readers from many disciplines, including social, political and medical history, classics, theology, and literature from the early middle ages to the eighteenth century. All the authors have produced ground-breaking work...' British Society for Literature and Science 'The quality and quantity of both explanatory notes and citations given by Munkhoff, Totaro, Anderson, and Pender are excellent and promise to be exceedingly helpful to those scholars who wish to pursue their ideas further... Vaught's text successfully achieves its goal of examining the variety and importance of rhetorics of disease and health in English literature and culture.' Early English Studies 'Part of the text's originality can be found in its coverage of both disease and health from antiquity to the mid-eighteenth century, which allows for greater comparison and critical analysis between and within topics, and over time periods... Completing this interesting collecti