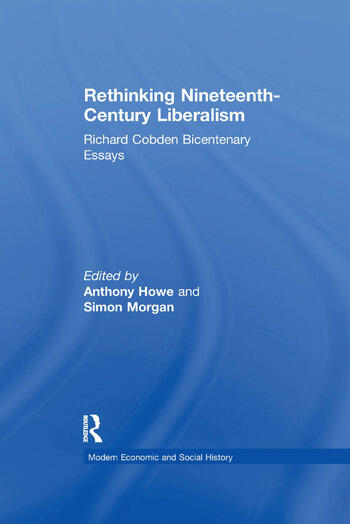 Richard Cobden (1804-65) rose from humble beginnings to become the leading advocate of nineteenth-century free-trade and liberalism. As a fierce opponent of the Corn Laws and promoter of international trade he rapidly became an influential figure on the national stage, whose name became a byword for political and economic reform. Yet despite the familiarity with which contemporaries and historians refer to 'Cobdenism' his ideals and beliefs are not always easy to identify and classify in a coherent way. Indeed, as this volume makes clear, the variety, diversity and malleability of the 'Cobdenite project' attest to the lack of a strict dogma and highlight Cobden's underlying pragmatism. Divided into five sections, this collection of essays offers a timely reassessment of Cobden's career, its impact and legacy in the two hundred years since his birth. Beginning with an investigation into the intellectual and cultural background to his emergence as a national political figure, the volume then looks at Cobden's impact on the making of Victorian liberal politics. The third section examines Cobden's wider influence in Europe, particularly the impact of his tour of 1846-47 which was in many ways a defining moment not only in the making of Cobden's liberalism but in the making of liberal Europe. Section four broadens the theme of Cobden's contemporary impact, including his contribution to the debate on peace, internationalism and the American Civil War; whilst the final section opens up the theme of Cobden's contested legacy, the variety of interpretations of Cobden's ideas and their influence on late nineteenth- and twentieth-century politics. Offering a broad yet coherent investigation of the 'Cobdenite project' by leading international scholars, this volume provides a fascinating insight into one of the nineteenth century's most important figures whose ideas still resonate today.

’This book of excellent essays is well worth the attention of historians of economic and political thought as well as of English Liberalism.’ EH.NET ’This collection manages to examine some of the major themes of radical reform that shaped nineteenth-century liberalism, to broaden the impact of Cobdenism on Europe, and to consider some of the contested elements of his legacy... The intended audience for this volume is academic, and scholars of liberalism, international relations, and nineteenth-century politics will read these essays profitably. It ought to be in every university library.’ Journal of British Studies ’The 15 essays in this collection, together with the substantial introduction by the editors who give a careful summary of each contribution, maintain a high standard in terms of scholarship throughout and they cover a wide range of topics.’ Economic History Review