Public Governance in the Age of Globalization 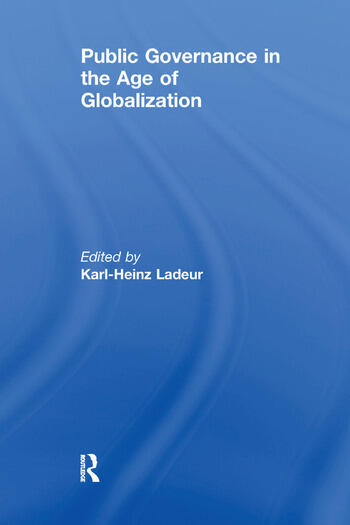 Public Governance in the Age of Globalization

Globalization and its relationship to public governance is one of the key issues of our time. In this book, experts from a number of disciplines attempt to define what these two terms mean and, perhaps even more importantly, what they do not. Taking as a starting point that globalization is neither the take-over of political power by multi-national 'stateless' enterprises, nor the chaotic unstructured process of dissolution of public order, the contributors suggest that what is occurring is more institutionalized than many critics would admit. It is argued that there are important transnational and supra-national elements of a new public order, which remain beyond the traditional borders of the state, but not completely beyond the state as such. Globalization, as opposed to former developments in the internationalization of the economy, is characterized by its transnational form, i.e. it is based on exchange processes which, to a greater or lesser degree, bypass both the state and the traditional international character of the world economy of the past.

Contents: Globalization and public governance - a contradiction?, Karl-Heinz Ladeur. Towards a General Theory of Globalization: Frontiers: national and transnational order, Lawrence M. Friedman; De-nationalized State agendas and privatized norm-making, Saskia Sassen. The Transformation of the Relationship between Public and Private in a Globalizing Society: Global private regimes: neo-spontaneous law and dual constitution of autonomous sectors?, Gunther Teubner; Globalization and the conversion of democracy to polycentric networks: can democracy survive the end of the Nation State?, Karl-Heinz Ladeur. The Change of Law and the State under the Pressure of Globalization: Global government networks, global information agencies and disaggregated democracy, Anne-Marie Slaughter; Sovereignty and solidarity: EU and US, Joshua Cohen and Charles F. Sabel; Legal orders between autonomy and intertwinement, Mark Van Hoecke. The New Forms of War in a Global Society: On globalization: the military dimension, Martin van Creveld. The Economy and Global Public Governance: The competitive State and the industrial organization of nations, Jean-Jacques Rosa; The network economy as a challenge to create new public law (beyond the State), Thomas Vesting; International trade as a vector in domestic regulatory reform: discrimination, cost-benefit analysis and negotiations, Joel P. Trachtman; Public governance and the co-operative law of transnational markets: the case of financial regulation, Pedro Gustavo Teixeira; Index.

Karl-Heinz Ladeur is Professor of Public Law at the University of Hamburg, Germany, and an External Professor at the European University Institute in Florence, Italy.

'Karl-Heinz Ladeur's volume offers a timely and original contribution to the debate on globalization and public governance. Responsibility - Ladeur says - will in the long run be concentrated neither at the level of domestic governments nor at the supranational level...rather, it will rather rest with private-public networks of decision-makers and groups that proliferate and overlap at all levels. The volume explores this hypothesis from a wide array of perspectives, bringing together cutting-edge research by leading academics in each field. The book will be a benchmark for the discussion to come.' Professor Oliver Gerstenberg, Leeds University, UK 'This is an extraordinary book. It offers a fascinating composition of contributions to the multi-faceted globalization debate from a wide range of disciplines (constitutionalism, comparative law and legal theory; international relations and international law and international trade law; social philosophy, sociology and political science.) Karl-Heinz Ladeur's collection...documents why globalization processes need to be explored from so many perspectives and at so many levels - and how such multi-disciplinary can generate synergetic effects.' Professor Christian Joerges, European University Institute, Florence, Italy '...refreshing in its attempt to apply empirical insights to emerging normative questions about global governance...The book's interdisciplinary approach to public governance is particularly valuable since certain disciplines are better suited to investigating certain institutions...the essays successfully contribute to the development of a unified academic idiom.' Global and European Law Book Review