Prometheus in Music
Representations of the Myth in the Romantic Era 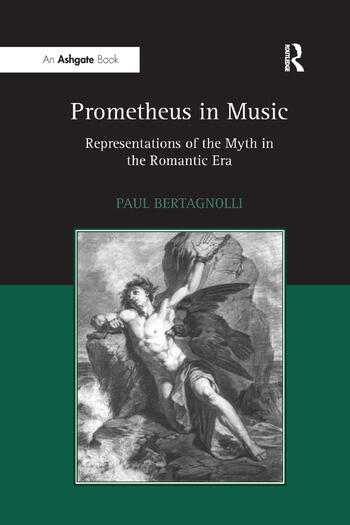 Prometheus in Music: Representations of the Myth in the Romantic Era

The ancient Greek myth of Prometheus, the primordial Titan who defied the Olympian gods by stealing fire from the heavens as a gift for humanity, enjoyed unprecedented popularity during the Romantic era. An international coterie of writers such as Goethe, Monti, Byron, the Shelleys, Sainte-Hélène, Coleridge, Browning, and Bridges engaged with the legend, while composers such as Beethoven, Reichardt, Schubert, Wolf, Liszt, Halévy, Saint-SaÃ«ns, Holmès, Fauré, Parry, Goldmark, and Bargiel based works of diverse genres on the fable. Romantic authors and composers developed a unique perspective on the myth, emphasizing its themes of rebellion, punishment for transgression and creative autonomy, in great contrast to artists of the preceding era, who more characteristically ignored the tribulations of Prometheus and depicted him as the animator of a naÃ¯ve, Arcadian mankind who, when awakened from their spiritual dormancy, expressed astonishment at the wonders of nature and paid homage to the Titan as a new god. Paul Bertagnolli charts the progress of the myth during the nineteenth century, as it articulates an extraordinary variety of issues pertaining to culture, society, aesthetics, and philosophy. Drawing on archival research, dance history, sketch studies, literary theory, linear analysis, topos theory, and reception history, individual chapters demonstrate that the legend served as a vehicle to express opinions on subjects as diverse as aristocratic patronage, movements of the body on the public stage, rebellion against political and religious authority, outright atheism, humanitarianism of the German Enlightenment, interest in the music of Greek antiquity, industrialization, nationalism inflamed by war, populism, and the aesthetics of musical form. Composers often resorted to varied and unorthodox musical techniques in order to reflect such remarkable subjects: Beethoven outraged critics by implying a key other than the tonic at the outset of the overture to

Contents: Promethean legacies: the myth in literature and music prior to the Romantic era; Gesture and convention in Beethoven's ballet d'action; Three settings of Goethe's Transgressive Ode; Towards a philosophy of history: Liszt's Prometheus music; The French Prometheus; Atheism, Wagnerism, and eroticism in Parry's Scenes from Shelley's Prometheus Unbound; Conservatism assimilates the Prometheus myth: concert overtures by Bargiel and Goldmark; Select bibliography; Index.

Paul Bertagnolli is Associate Professor of Musicology at the Moores School of Music, University of Houston, USA.

’This timely study is not simply an ambitious account of these composers' engagement with the Promethean figure, but enforces a new way of reading the myth as a whole. The book is, to borrow Heaney's words, "a critical fantasia, a carnival of utterance" about the Promethean myth in nineteenth-century European musical culture....This book will be a musicological landmark since it garners both old and new research. But Bertagnolli's main achievement is to give us a precise sense of Prometheus in nineteenth-century musical culture and it is the aesthetic weight of the ancient Promethean theme that makes it such an interesting and viable musicological study.’ Journal of the Society for Musicology in Ireland