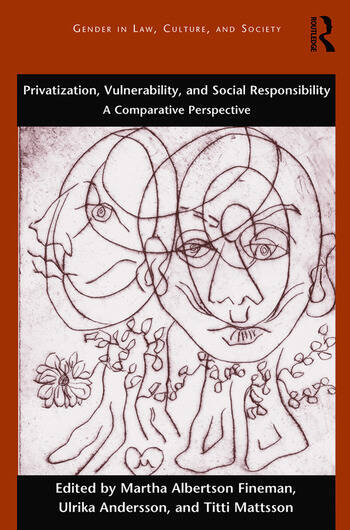 Taking a cross-cultural perspective, this book explores how privatization and globalization impact contemporary feminist and social justice approaches to public responsibility. Feminist legal theorists have long problematized divisions between the private and the political, an issue with growing importance in a time when the welfare state is under threat in many parts of the world and private markets and corporations transcend national boundaries. Because vulnerability analysis emphasizes our interdependency within social institutions and the need for public responsibility for our shared vulnerability, it can highlight how neoliberal policies commodify human necessities, channeling unprofitable social relationships, such as caretaking, away from public responsibility and into the individual private family. This book uses comparative analyses to examine how these dynamics manifest across different legal cultures. By highlighting similarities and differences in legal responses to vulnerability, this book provides important insights and arguments against the privatization of social need and for a more responsive state.

5. In the Land of Choice: Privatized Reality and Contractual Vulnerability

6. Entrepreneurial Subjectivity, the Privatization of Risk, and the Ethics of Vulnerability

9. Privatizing and Corporatizing the University: A U.S. and UK Comparison

10. Freedom of Choice over Equality as Objective for the Swedish Welfare State? The Latest Debate on Choice in Education

11. Privatization in the Human Services: Impact on the Front Lines and the Ground Floor

13. E-government for the distribution of public services in Sweden: Privatization, Vulnerability and Social Responsibility reshaped

14. What does privatization mean for women in Uganda?

IV. Privatization of the Coercive Power of the State

15. The Human Right to Dignity and Commodification of Prisoners: Considering Worldwide Challenges to Prison Privatization

17. Harmed selves harming others – A vulnerability approach to the criminal justice system