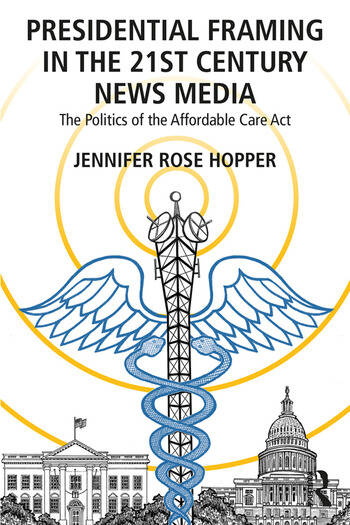 Presidential Framing in the 21st Century News Media: The Politics of the Affordable Care Act

The Patient Protection and Affordable Care Act came into existence at a time when the president’s ability to lead the public was in question, political polarization had intensified, and the media environment appeared ever more fragmented, fast-moving, and resistant to control. Under such circumstances, how can contemporary American presidents such as Barack Obama build and maintain support for themselves and their policies, particularly as controversies arise?

Using case studies of major contests over how key elements of the Affordable Care Act would be framed, and analysis of how those frames fared in influential and popular U.S. news sources, Hopper examines the conditions under which the president can effectively shape public debates today. She argues that despite the difficult political and communications context, the president retains substantial advantages in framing major controversial issues for the media and the public. These presidential framing advantages are conditional, however, and Hopper explores the factors that help make presidential frames more or less likely to gain hold in the news today. More so than in the past, an element of unpredictability in this news environment means that in pursuing favorable messaging, the president and his surrogates may also generate some unintentional consequences in how issues are portrayed to the public. Presidential frames can evolve with unfolding events to take on new meanings and applications, a process facilitated alternately by supporters, opponents, and media actors. Still, media figures and political opponents remain largely reactive to presidential communications, even as some seek to publicize and exploit weaknesses in the administration’s narratives. A close look at these recent cases casts new light on the scholarly debate surrounding the president’s ability to persuasively communicate and challenges conventional wisdom that the 21st century media largely present an unmanageable news environment for the White House.

engages with current events in American politics, focusing on the Obama Administration and the Affordable Care Act, while also reflecting upon the state of the American presidency, the news media, and the public in ways that have substantial implications for all of these actors, not merely in the present, but into the future, making it a compelling read for scholars of Political Science, Media Studies, Communication Studies, and Public Policy.

Chapter 2: What’s in a Name? Taking Back "Obamacare"

Chapter 3: The Politics of Framing Policy Substance: Tax or Penalty?

"Jennifer Hopper’s investigation of the Obama Administration’s efforts to manage the political debate surrounding the Affordable Care Act provides a welcome exploration of the influence and limitations of presidential leadership within the media marketplace in the post-broadcast age. Her careful and thoughtful analysis offers a new understanding of framing efforts and effects and sheds light on how even in a complicated media environment the president retains powerful advantages for advancing his agenda."—Diane J. Heith, St. John's University

"Presidential Framing in the 21st Century News Media does a wonderful job of analyzing President Obama’s herculean efforts to use the wide range of modern media outlets to sell and then re-sell the Affordable Care Act. From the challenges over framing the original bill and whether to embrace the term Obamacare to marketing health insurance to young adults on "Between Two Ferns," this accessible and thorough book is a vital resource for students of political communication, journalism, the presidency and public policy."—Stephen Farnsworth, Professor of Political Science, University of Mary Washington & Former Chair, Political Communication Section, APSA

"… this very readable and analytically competent analysis could be a template for how to study the impact of presidential framing strategies on the media, but that analysis is only the first installment of a much wider research agenda."—Raymond Tatalovich, Congress & the Presidency