Popular Music in France from Chanson to Techno
Culture, Identity and Society 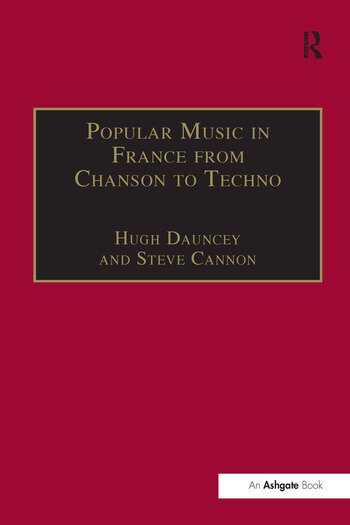 Popular Music in France from Chanson to Techno: Culture, Identity and Society

In France during the 1960s and 1970s, popular music became a key component of socio-cultural modernisation as the music/record industry became increasingly important in both economic and cultural terms in response to demographic changes and the rise of the modern media. As France began questioning traditional ways of understanding politics and culture before and after May 1968, music as popular culture became an integral part of burgeoning media activity. Press, radio and television developed free from de Gaulle's state domination of information, and political activism shifted its concerns to the use of regional languages and regional cultures, including the safeguard of traditional popular music against the centralising tendencies of the Republican state. The cultural and political significance of French music was again revealed in the 1990s, as French-language music became a highly visible example of France's quest to maintain her cultural 'exceptionalism' in the face of the perceived globalising hegemony of English and US business and cultural imperialism. Laws were passed instituting minimum quotas of French-language music. The 1980s and 1990s witnessed developing issues raised by new technologies, as compact discs, the minitel telematics system, the internet and other innovations in radio and television broadcasting posed new challenges to musicians and the music industry. These trends and developments are the subject of this volume of essays by leading scholars across a range of disciplines including French studies, musicology, cultural and media studies and film studies. It constitutes the first attempt to provide a complete and up-to-date overview of the place of popular music in modern France and the reception of French popular music abroad.

'... an immensely valuable collection of essays, enriched by a jewel of a bibliography that will surely inspire scholars in the interdisciplinary field of French cultural studies, where history and sociology come together with high, low and middlebrow forms of expressions.' H-France Reviews