Poor No More
Rethinking Dependency and the War on Poverty 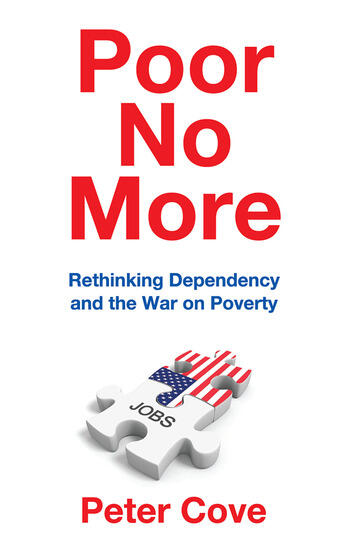 Poor No More: Rethinking Dependency and the War on Poverty

In the 1960s, America set out to end poverty. Policy-makers put forth an unprecedented package of legislation, funding poverty programs and empowering the poor through ineffectual employment-related education and training. However, these handouts produced little change, and efforts to provide education and job-training proved inconsequential, boasting only a 2.8 percent decrease in the poverty rate since 1965. Decades after the War on Poverty began, many of its programs failed. Only one thing really worked to help end poverty-and that was work itself, the centerpiece of welfare reform in 1996.  Poor No More is a plan to restructure poverty programs, prioritizing jobs above all else. Traditionally, job placement programs stemmed from non-profit organizations or government agencies. However, America Works, the first for-profit job placement venture founded by Peter Cove, has the highest employee retention rate in the greater New York City area, even above these traditional agencies. When the federal government embraced the work-first ideal, inspired by the success of America Works, welfare rolls plummeted from 12.6 million to 4.7 million nationally within one decade. Poor No More is a paradigm-shifting work that guides the reader through the evolution of America's War on Poverty and urges policy-makers to eliminate training and education programs that waste time and money and to adopt a work-first model, while providing job-seekers with the tools and life lessons essential to finding and maintaining employment.

1. The War on Poverty Begins: Benevolence Balloons
2. Our Moral Cliff: The Rise of Dependency
3. Why Have We Become a Nation of Takers?
4. The Failure of Poverty Programs
5. America Works: Policy Implications for Dependency and Poverty Reduction
6. Education and Training versus Work-First
7. The Road to Work and Reduced Dependency: Real Policy Solutions

“Peter Cove has spent a lifetime figuring out how to combat poverty. His work transcends the usual left-right divisions and goes straight to the heart of how to solve our most vexing problems. His is a voice that absolutely needs to be heard.”

“Poor No More is not just a book. It is a declaration of independence that tells us how to defeat the scourge of the American economy—poverty.  For forty years Peter Cove has fought this baffling enemy and discovered how to transform the seemingly incurable plague into prosperity.”

—Thomas Fleming, author The Great Divide: The Clash Between Washington and Jefferson That Still Troubles Us Today

“At long last a major book is written that deals sensibly with the question of poverty. After years of relying on ineffective government training programs, Peter Cove prescribes a detailed and brilliant analysis of what can be done. In this case, Cove not only prescribes a program, but he lives it and demonstrates what can and does work. This book is a tour de force and a must read for every government official and citizen who cares about our national future.”

—Herb London, President of the London Center for Policy Research

“What's most valuable about this book is the combination of Peter Cove’s personal story and more academic policy research. Both tend toward support for work first, but in different ways. I can't think of another case where someone who initially shared Great Society views of poverty came to different and more conservative conclusions based on program experience. And this occurred independently of the research, which was going the same way. It's crucial that Cove didn't begin as a conservative, as many critics of social policy do. He also still preserves a commitment to helping the poor, such as liberals claim for themselves.”