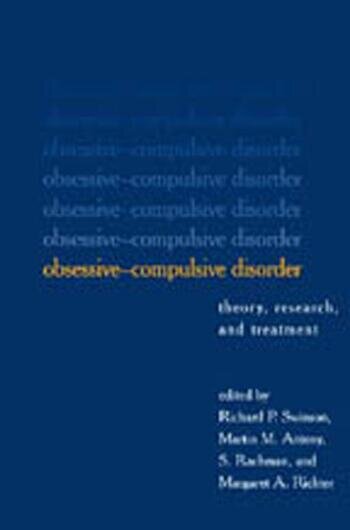 Providing a comprehensive overview of obsessive-compulsive disorder (OCD), this book brings together timely contributions from leading researchers and practitioners in the field. In sections covering psychopathology, assessment and treatment, and obsessive-compulsive spectrum disorders, chapters contain a wealth of new and recent data, numerous case examples, and helpful conceptual and clinical pointers. An appendix features extensive resource listings for both clinicians and patients

Richard P. Swinson, MD, is Professor and Chair of the Department of Psychiatry, Faculty of Health Sciences, McMaster University. He is also Professor in the Department of Psychiatry at the University of Toronto, and Psychiatrist in Chief at St. Joseph's Hospital and Hamilton Psychiatric Hospital in Hamilton, Ontario. Previously, he held several appointments at the Clarke Institute of Psychiatry, including Vice President Medical Affairs, Chief of Medical Staff, and Head of the Anxiety Disorders Clinic. Dr. Swinson is currently chair of the Examination Board in Psychiatry for the Royal College of Physicians and Surgeons in Canada. He has published approximately 200 scientific papers, book chapters, and reports, mostly on anxiety disorders and related conditions. In addition, he was a member of the DSM-IV subcommittees for obsessive-compulsive disorder and for panic disorder and agoraphobia.

Martin M. Antony, PhD, ABPP, is Professor of Psychology at Ryerson University in Toronto, Ontario, Canada. He was founding director of the Anxiety Treatment and Research Clinic and the Psychology Residency Program at St. Joseph’s Healthcare Hamilton. The recipient of career awards from the Society of Clinical Psychology, the Canadian Psychological Association (CPA), and the Anxiety and Depression Association of America, Dr. Antony is a Fellow of the Royal Society of Canada and has served as president of the CPA and the Association for Behavioral and Cognitive Therapies. He has published over 30 books and 275 scientific articles and book chapters on cognitive-behavioral therapy, psychological assessment, anxiety disorders, obsessive–compulsive disorder, and perfectionism.

S. Rachman, PhD, is Professor Emeritus in the Department of Psychology at the University of British Columbia, Canada, and Professor Emeritus at the Institute of Psychiatry, University of London, United Kingdom. Recognized as a leader in the research and treatment of obsessive–compulsive disorder and other anxiety disorders, he is a recipient of the Lifetime Achievement Award from the British Psychological Society, among many other honors.

Margaret A. Richter, MD, received her M.D. from the University of Ottawa and completed her psychiatric training at the University of Toronto. She was named the Mary Early Fellow by the Canadian Psychiatric Research Foundation from 1990-1992 for her work on the familial nature of OCD. Currently, she is Assistant Professor in the Department of Psychiatry, University of Toronto, and Staff Psychiatrist in the Anxiety Disorders Clinic, Clarke Institute of Psychiatry. She continues to be actively involved as a clinician and research in the area of OCD, particularly with respect to the genetic basis of OCD and the relationship between OCD and spectrum disorders.

'Outstandingly good; it is both practical and thought-provoking and, one suspects, destined to become a classic of its kind.' - American Journal of Psychiatry

'Because of its many excellent chapters, the volume would certainly be of interest to a wide readership. This would include researchers, clinicians, and graduate students who seek to learn more about the opulent complexity of the disorder.' - Journal of Cognitive Psychotherapy

'At last, a comprehensive scrutiny of theoretical, research, and treatment approaches to one of the most difficult problems encountered in clinical practice....This highly readable book is a "must" for psychotherapists, psychopharmacologists, and researchers attempting to unravel this disorder.' - Aaron T. Beck, MD

'Probably the most comprehensive and balanced survey of this illness available....The first two parts offer an outstanding appraisal of the state of the art of the field and how these insights translate into the clinical approach.' - Psychotherapy and Psychosomatics

'A highly qualified group of editors combined to produce a state-of-the-art text on obsessive compulsive disorder (OCD). They assembled an international representation of expert contributors but managed to create a volume that reads as if it were written by one person....Case histories, chapter references, and tables complete a scholarly presentation of an important topic. A valuable and complete text on the subject, this is a worthy acquisition for both undergraduate and graduate level psychology collections.' - Choice