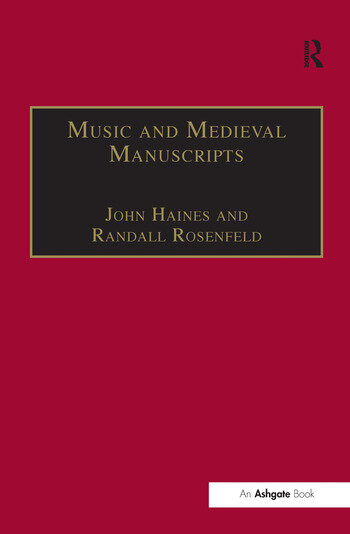 The interdisciplinary approach of Music and Medieval Manuscripts is modeled on the work of the scholar to whom the book is dedicated. Professor Andrew Hughes is recognized internationally for his work on medieval manuscripts, combining the areas of paleography, performance, liturgy and music. All these areas of research are represented in this collection with an emphasis on the continuity between the physical characteristics of medieval manuscripts and their different uses. Albert Derolez provides a landmark and controversial essay on the origins of pre-humanistic script, while Margaret Bent proposes a new interpretation of a famous passage from a fifteenth-century poem by Martin Le Franc. Timothy McGee contributes an innovative essay on late-medieval music, text and rhetoric. David Hiley discusses musical changes and variation in the offices of a major saint’s feast, and Craig Wright presents an original study of Guillaume Dufay. Jan Ziolkowski treats the topic of neumed classics, an under-explored aspect of the history of medieval pedagogy and the transmission of texts. The essays that comprise this volume offer a unique focus on medieval manuscripts from a wide range of perspectives, and will appeal to musicologists and medievalists alike.

'... well worth dipping into: you will probably read more than you intended.' Early Music Review '... a rewarding volume both to dip into and to use for specialised reference purpose. Its diversity should attract a wide range of readers...' Church Music Quarterly '... [a] fine collection...' Notes ’In this collection of essays, edited by a musicologist with profound interests in paleography (John Haines) and a codicologist who is a specialist in the performance of early music (Randall Rosenfeld), a diverse group has 'written well', offering a 'good day' to scholars and performers alike... [a] fine collection...’ Muse