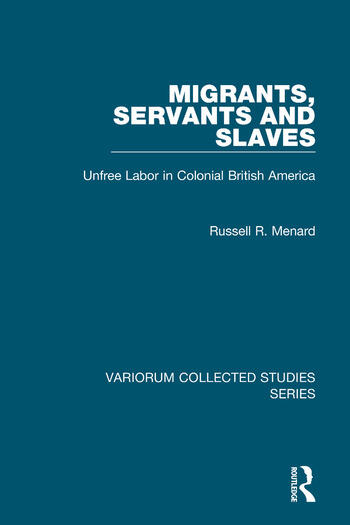 Written by one of the leading economic historians of British America, the essays in Migrants, servants, and slaves (several of which have achieved the status of minor classics) address a series of topics of central importance to the field. The central theme is that of the transition from a labor force dominated by English indentured servants, to one composed largely of African slaves. In the enquiry the author examines the changing composition of the servant population in the British North American colonies, the determinants of the pace and volume of servant migration, and the opportunities available to servants who completed their terms. On the subject of slavery, he looks at how the initial investments were financed, and the ability of the slave population to reproduce itself.

Contents: Introduction; Transitions to African slavery in British America, 1630-1730: Barbados, Virginia, and South Carolina; From servant to freeholder: status mobility and property accumulation in 17th-century Maryland; From servants to slaves: the transformation of the Chesapeake labor system; The Maryland slave population, 1658-1730: a demographic profile of blacks in four counties; Immigrants and their increase: the process of population growth in early colonial Maryland; Financing the Lowcountry export boom: capital and growth in early South Carolina; The Africanization of the Lowcountry labor force, 1670-1730; Slave demography in the Lowcountry, 1670-1740: from frontier society to plantation regime; British migration to the Chesapeake colonies in the 17th century; Migration, ethnicity, and the rise of an Atlantic economy: the re-peopling of British America, 1600-1790; Slavery, economic growth, and Revolutionary ideology in the South Carolina Lowcountry; Index.

'Thanks to his intense archival research over the past three decades, displayed in this collection to great effect, Menard has done more to enable early American historians to talk thoughtfully and rigorously about labour in British America than almost any other historian..... demonstrates ... a consistently high standard of scholarship...' Slavery and Abolition 'Ashgate has done a major service by reprinting Menard's important essays in a single volume.' History