Medicine and Religion in Enlightenment Europe 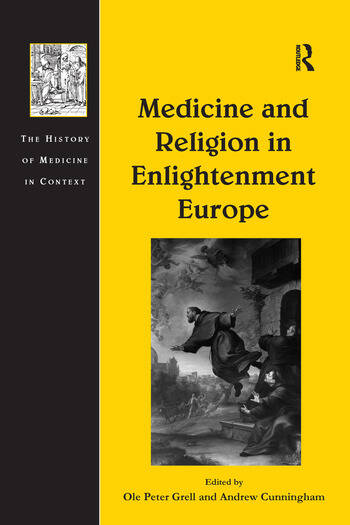 Medicine and Religion in Enlightenment Europe

The Enlightenment period, here understood as covering the years 1650 to 1789, is usually considered to be a period when religion was obliged to give way to rationality. With respect to medicine this means that the religious elements in the treatment and interpretation of diseases to all intents and purposes disappeared. However, there are growing indications in recent scholarship that this may well be an overstatement. Indeed it appears that religion retained many of its customary relations with medicine. This volume explores how far, and the ways in which, this was still the case. It looks at this multi-faceted relationship with respect to among others: medical care and death in hospitals, religious vocation and nursing, chemical medicine and religion, the clergy and medicine, the continued significance of popular medicine, faith healing, dissection and religion, and religious dissent and medical innovation. Within these significant areas the volume provides a European perspective which will make it possible to draw comparisons and determine differences.

Contents: Introduction: 'where there are 3 physicians, there are 2 atheists', Andrew Cunningham; Enlightenment, radical enlightenment and the 'medical revolution' of the late 17th and 18th centuries, Jonathan I. Israel; Physicians and surgeons in the service of the inquisition: the nexus of religion and conventional medical training in enlightenment-era Portugal, Timothy Walker; The ignorance of midwives: the role of clergymen in Spanish enlightenment debates on birth care, José Pardo-TomÃ s and Ã€lvar MartÃ¬nez-Vidal; Medicine, history and religion in Naples in the 17th and 18th centuries, Maria Conforti; Tirami sÃ¹. Pope Benedict XIV and the beatification of the flying saint Guiseppe da Copertino, Catrien Santing; Medicine, enlightenment and Christianity in 18th century France; the library evidence, L.W.B. Brockliss; Moral lessons of perfection: a comparison of Mennonite and Calvinist motives in the anatomical atlases of Bidloo and Albinus, Rina Knoeff; 'Imperfect chaos': tropical medicine and exotic natural history c.1700, Benjamin Schmidt; Johann Anton von Wolter (1711-1787): a Bavarian court physician between aufklÃ¤rung and reaktion?, Claudia Stein; A medical miracle revisited: the enlightenment debate on a miraculous golden tooth, Robert JÃ¼tte; Between anatomy and religion: the conversions to Catholicism of the 2 Danish anatomists: Nicolaus Steno and Jacob WinslÃ¸w, Ole Peter Grell; Medicine, witchcraft and the politics of healing in late 17th century England, Peter Elmer; Psychology and the laws of nature: from souls to the powers of the mind in the Scottish enlightenment, John Henry; Index.

Ole Peter Grell is Professor in Early Modern History and Director of the Renaissance and Early Modern Research Group at The Open University, UK. Andrew Cunningham is Senior Research Fellow in the Department of History and Philosophy of Science at the University of Cambridge, UK. He also wrote and presented the BBC Radio 4 series The Making of Modern Medicine.

’... the book is a work of serious scholarship that deserves attention and discussion.’ Theological Studies ’This well-produced and effective volume brings together thirteen essays on different aspects of the interface between religion and medical thought and practice in late seventeenth- and eighteenth-century Europe to offer a significant contribution to our understanding of the Enlightenment more broadly.’ Journal of Ecclesiastical History ’The volume is highly recommended for any scholar seeking a fuller view of the Enlightenment.’ New Perspectives on the Eighteenth Century ’This volume will be of interest not only to specialists but also to readers more broadly concerned with the cultural history of eighteenth-century Europe.’ Catholic Historical Review