Marxism and Leninism
An Essay in the Sociology of Knowledge 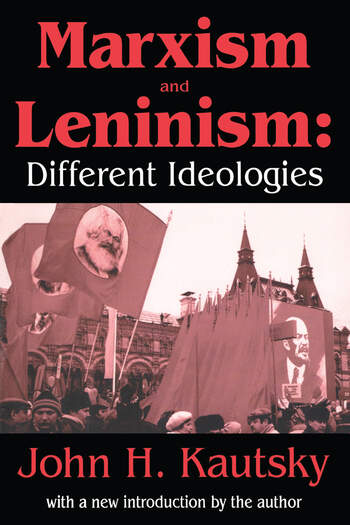 Marxism and Leninism: An Essay in the Sociology of Knowledge

One of the pre-eminent scholars in the history and theory of European socialism, John Kautsky in this volume develops the argument that Marxism and Leninism are two quite different ideologies. He counterposes this view with the commonly accepted one of Leninism as simply one form that Marxism took in the course of its evolution. The easy identification of Marxism and Leninism with each other has been responsible for great confusion in the realm of both scholarly and political discourse.

Kautsky develops his position within the tradition of the sociology of knowledge, by the close examination of the different meanings of the Marxist vocabulary as it was used by Marxists and Leninists. His frame of reference turns on the position of labor in turn-of-the-century industrial Europe and the role of modernizing intellectuals in underdeveloped countries. While the vocabulary used was often common to Marx and Lenin, Marxism was explicitly concerned with appeals to workers in industrial nations such as Germany and Austria, whereas Leninism appeals to revolutionaries in underdeveloped nations such as Russia and China.

Whatever be the current assessment of the future of socialism and communism, Kautsky holds that it is important to study the core structure of both Marxism and Leninism, since they were major phenomena that powerfully affected the world in the twentieth century. Beyond that, in dealing with how different ideologies can be ensconced within the same rhetoric, the book offers an outstanding entrance into the sociology of knowledge as a tool for political analysis. This is a unique work in the function of language no less than the nature of ideology.

The work is divided into five parts: Two environments, two ideologies, one terminology. The evolution of Marxism, its appeals in the German Empire. The evolution of Leninism, its appeals to strata involved in making modernizing revolutions. The differential outcomes of Marxism in the East and Leninism in the West. And finally, an examination of why Marxism and Leninism have been seen as a single ideology. In a new essay prepared for this new edition, Kautsky provides important autobiographical as well as historical reflections on how this book fits into the overall pattern of the author's work.