Linear Programming and Algorithms for Communication Networks
A Practical Guide to Network Design, Control, and Management 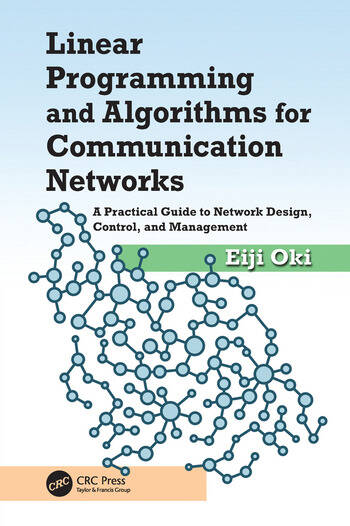 Linear Programming and Algorithms for Communication Networks: A Practical Guide to Network Design, Control, and Management

Using the GNU Linear Programming Kit (GLPK) package, which is designed for solving linear programming and mixed integer programming problems, it explains typical problems and provides solutions for communication networks. The book provides algorithms for these problems as well as helpful examples with demonstrations. Once you gain an understanding of how to solve LP problems for communication networks using the GLPK descriptions in this book, you will also be able to easily apply your knowledge to other solvers.

Eiji Oki is an Associate Professor at the University of Electro-Communications, Tokyo, Japan. He received the B.E. and M.E. degrees in instrumentation engineering and a Ph.D. degree in electrical engineering from Keio University, Yokohama, Japan, in 1991, 1993, and 1999, respectively. In 1993, he joined Nippon Telegraph and Telephone Corporation (NTT) Communication Switching Laboratories, Tokyo, Japan. He has been researching network design and control, traffic-control methods, and high-speed switching systems. From 2000 to 2001, he was a Visiting Scholar at the Polytechnic Institute of New York University, Brooklyn, New York, where he was involved in designing terabit switch/router systems. He was engaged in researching and developing high-speed optical IP backbone networks with NTT Laboratories. He joined the University of Electro-Communications, Tokyo, Japan, in July 2008.

Prof. Oki was the recipient of the 1998 Switching System Research Award and the 1999 Excellent Paper Award presented by IEICE, the 2001 Asia-Pacific Outstanding Young Researcher Award presented by IEEE Communications Society for his contribution to broadband network, ATM, and optical IP technologies, and the 2010 Telecom System Technology Prize by the Telecommunications Advanced Foundation.