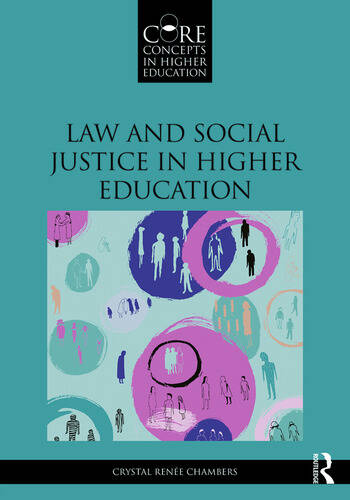 The latest volume in the Core Concepts in Higher Education series explores the complexity of law in higher education and both the limits and opportunities of how law can promote inclusivity and access on campus. Through a historical and legal framework, this volume discusses undergraduate students' histories of inclusion and struggles for social justice in higher education by race, sex, social class, dis/ability, and sexual orientation. Bridging research, theory, and practice, Law and Social Justice in Higher Education encourages future and current higher education and student affairs practitioners to consider how they can collaborate to further a just society.

Chapter 2: Citizenship and Racial Fragmentation: College Access from the Colonial Era to the Antebellum PeriodOrigins: Universal Rights for Select Individuals
The Status of People of Color in the Antebellum Period
Abolition and the Aftermath of the Dred Scott Decision
The Higher Education of People of Color from Colonial Times through the Progressive Era
This Land Was Our Land
A Brief History of Native American Higher Education in the Colonial Era
Early Black, Native American, and Puerto Rican Higher Education
Strangers from a Different Shore
We Didn’t Cross the Border, the Border Crossed Us
Summary

Chapter 3: Breaking Barriers: From Emancipation to Desegregation
The Legal Status of Blacks after the Civil War
The Case of Homer Plessy
The Mismeasure of Man
The Struggle for Racial Equality in the Progressive Era
A Strategy
The Legal Decisions
The Academic Battle
Summary

Chapter 8: The Sex Revolution and Reminiscences
Consciousness Raising and Feminism in the 1960s-1970s
The Downside of Success
General Considerations: Women and the Law
Title IX: Securing Women’s Rights in Education
Admissions and Financial Aid
Joining the Adams Suits
Women on Campus
The Chilly Classroom
Women’s Studies: A Curricular and Scholarly Response
Chilly Climates beyond the Classroom
The Special Case of Women in Athletics
Women’s Health and Safety

"Law and Social Justice in Higher Education explores the juxtaposition between law and society in higher education with an emphasis on the evolution of social justice both as a political concept and as a transformative resource.  This book’s exploration of the experiences of particular sectors of society--especially minorities, women, and people with disabilities-- significantly contributes to both the scholarship of social justice and the responsibilities of higher education to motivate and foster change."

"Chambers’ Law and Social Justice in Higher Education contributes substantially to the field of higher education and to critical discourses that address underlying challenges of race, gender, and class disparity in America and its colleges and universities. Reading this compelling book reminds me why I agreed to start this book series on core issues in higher education."