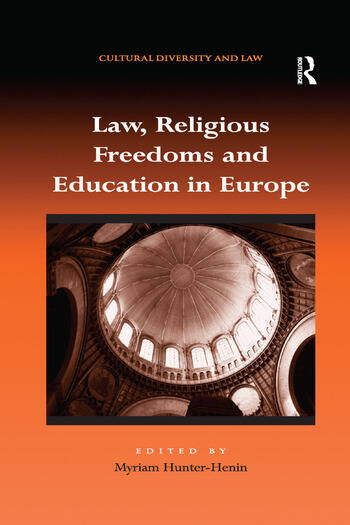 This collection considers how contemporary cultural and religious diversity challenges and redefines national constitutional and legal frameworks and concepts, within the context of education. It offers a critical reflection on the extent and meanings given to religious freedom in education across Europe. The contributions deal primarily with Western Europe although the book also includes a study of the US vibrant debates on Creationism. This volume considers issues such as religious expression, faith schooling and worship in schools, in a multidisciplinary and comparative approach. The book first examines key concepts, before presenting national models of religion and education in Europe and analyzing case studies relating to religious symbols worn at school and to the teaching of religious education. Legal questions are examined in a wider context, in the light of the intentions of state policy and of current national and transnational debates. Controversies on the legal implications of personal and national identities are for example analyzed. From a comparative perspective, the chapters examine the possible converging power of human rights and anti-discrimination discourses and reveal the difficulties and risks involved in seeking to identify the best model for Europe. This topical study of a highly sensitive area of education presents a valuable insight for students, researchers and academics with an interest in cultural and religious diversity, human rights and education.

Myriam Hunter-Henin joined the Faculty of Laws, UCL, in September 2003. She was formerly a researcher and lecturer at Paris I (Pantheon-Sorbonne). Her main interests are Comparative Law, Family Law, Law and Religion, Private International Law and Bioethics. Her work addresses the implications of human rights in the private sphere, especially the challenges posed to the legal theory of Conflict of Laws and to traditional concepts of family law such as marriage and motherhood. It also addresses the interaction and tensions between law and religion in the sphere of education and family law in a comparative perspective. She is currently Deputy Director for the Faculty’s various international programmes and Director of the European Double Degree Programmes. She is also a Fellow of the Comité franÃ§ais de droit international privé in Paris, France, and co-director of the Institute of Global law.

'Nowhere is the relationship between religions and the state more contested than in the field of education. Dr. Hunter-Henin has assembled an impressive collection of legal perspectives which are firmly rooted in comparative analysis and constitutional principle. At last we have a volume which does justice to the complexity of the topic.' Julian Rivers, University of Bristol, UK 'When the theories of secularisation are being questioned, these essays cast fresh light on the complex articulation between education and religion in several countries, and on the many ways to solve the tensions between the demands of individuals or communities and the norms of societies. A must read for all concerned.' Luc Borot, Université Paul-Valéry Montpellier III, France 'This is an excellent book. Its varied studies indicate unequivocally that education is not only an issue of profound importance in relations between religions and the state but also that it is one of the most hotly debated topics in contemporary society. The scholars who have contributed to this volume provide critical yardsticks for both the place of religion in education and the types of religion and state relations in Europe and beyond.' Norman Doe, Cardiff University, UK 'While many of the essays inevitably overlap, all are thoroughly argued and together provide a wide overview of principles and case studies that may yet influence the courts in a field that is rapidly changing.' Ecclesiastical Law Journal ’This welcome addition to the current literature on law, education and religious freedoms draws together analyses from contributors with a wide variety of academic and professional backgrounds... provides an impressive array of analysis and perspectives and will be of great interest to all scholars in the field of law and religion, and a necessary acquisition for anyone with a particular concern for education and religious freedom.’ International and Comparative Law Quarterly ’...brings together st