Language and Characterisation
People in Plays and Other Texts 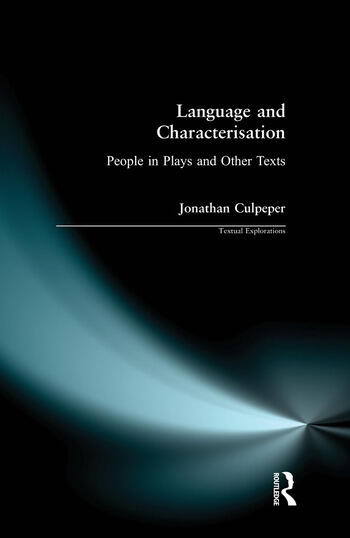 Language and Characterisation: People in Plays and Other Texts

Textual Explorations General Editors-
Mick Short, Lancaster University
Elena Semino, Lancaster University
The focus of this series is on the stylistic analysis of literary and non-literary texts, and the theoretical issues which such work raises. Textual Explorations will include books that cover studies of literary authors, genres and other groupings, stylistic studies of non-literary texts, translation study, the teaching of language and literature, the empirical study of literature, and corpus approaches to stylistics and literature study. Books in the series will centre on texts written in English. Readership of the series is mainly undergraduate and postgraduate students, although advanced sixth formers will also find the books accessible. The series will be of particular interest to those who study English language, English literature, text linguistics, discourse analysis and communication studies.

Language & Characterisation- People in Plays & Other Texts explores how the words of a text create a particular impression of a character in the reader's mind. Drawing together theories from linguistics, social cognition and literary stylistics, it is the first book-length study to focus on:

Containing numerous examples from Shakespeare's plays, the book also considers a wide range of other genres, including, prose fiction, verse, films, advertisements, jokes and newspapers. Language and Characterisation is as practical as it is theoretical and equips readers with analytical frameworks to reveal and explain both the cognitive and the linguistic sides of characterisation. Clear and detailed introductions are given to the theories, and useful suggestions for further analysis are also made at the end of each part of the book. The book will be essential reading for students and researchers of language, literature and communication.

Jonathan Culpeper is a Lecturer in the Department of Linguistics and Modern English Language at Lancaster University.