Judicial Elections in the 21st Century 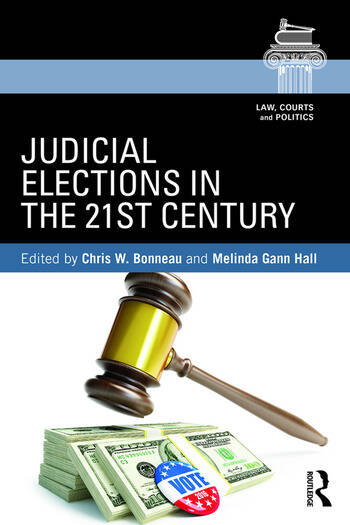 Judicial Elections in the 21st Century

Leading authorities present the latest cutting edge research on state judicial elections. Starting with recent transformations in the electoral landscape, including those brought about by U.S. Supreme Court rulings, this volume provides penetrating analyses of partisan, nonpartisan, and retention elections to state supreme courts, intermediate appellate courts, and trial courts. Topics include citizen participation, electoral competition, fundraising and spending, judicial performance evaluations, reform efforts,attack campaigns, and other organized efforts to oust judges. This volume also evaluates the impact of judicial elections on numerous aspects of American politics, including citizens’ perceptions of judicial legitimacy, diversity on the bench, and the consequences of who wins on subsequent court decisions. Many of the chapters offer predictions about how judicial elections might look in the future. Overall, this collection provides a sharp evidence-based portrait of how modern judicial elections actually work in practice and their consequences for state judiciaries and the American people.

1. Judicial Elections in the 21st Century

4. Campaigning for the High Court Bench

8. Trial Court Campaign Messaging in a Post-White Environment: An Analysis of Candidate Websites in Contested Elections

Section 4: The Impact of Judicial Elections

10. Measuring the Impact of Election Outcomes on Voting in State Supreme Courts

Chris W. Bonneau is Associate Professor of Political Science at the University of Pittsburgh. His work on judicial elections has been published in the top journals in political science, and he has coauthored two books on the subject: In Defense of Judicial Elections (2009, Routledge) and Voters’ Verdicts: Citizens, Campaigns, and Institutions in State Supreme Court Elections (2015, University of Virginia Press). Additionally, he recently coedited Making Law and Courts Research Relevant: The Normative Implications of Empirical Research (2015, Routledge). Professor Bonneau currently serves as coeditor of State Politics and Policy Quarterly, one of the most influential substantive outlets for scholarship on state judicial politics.

Melinda Gann Hall is Distinguished Professor of Political Science at Michigan State University. A pioneer in the field, her work on judicial elections spans over three decades and has been published in all of the most highly regarded journals in the discipline. She is coauthor of In Defense of Judicial Elections (2009, Routledge) and author of Attacking Judges: How Campaign Advertising Influences State Supreme Court Elections (2015, Stanford University Press).

'Although the political and legal environments surrounding judicial elections have changed considerably in recent years, policy debates regarding judicial selection and retention institutions tend to remain stagnant in their reliance on rhetorical appeals rather than systematic evidence. In this volume, an all-star cast offers new insight into how contemporary judicial elections operate and impact American politics. With coverage spanning the judicial hierarchy and addressing fundamental issues such as voting, campaign finance, advertising, performance, legitimacy, and diversity, this comprehensive collection is a must-have for anyone interested in contemporary judicial elections. - Greg Goelzhauser, Utah State University

'Bonneau and Hall have done it again! This time they have assembled an all-star line-up of scholars of state courts to give us their analyses of a variety of pressing issues surrounding the electing of judges. This collection of chapters is state-of-the-art, filled with unexpected findings and insights, and will be excellent for use in the classroom. I heartily recommend this book not only to judicial scholars but to non-judicial folks interested in larger issues of elections, campaign effects, and the like.' - James Gibson, Washington University in St. Louis

'Bonneau and Hall have assembled an incredibly insightful and thought-provoking set of essays by leading authorities on judicial elections. This book would be a fantastic choice for any professional or graduate class on the judiciary or elections, as well as upper division undergraduate classes on the legal system.' - Jeffrey Yates, Binghamton University