Introduction to Psychotherapy
Its History and Modern Schools 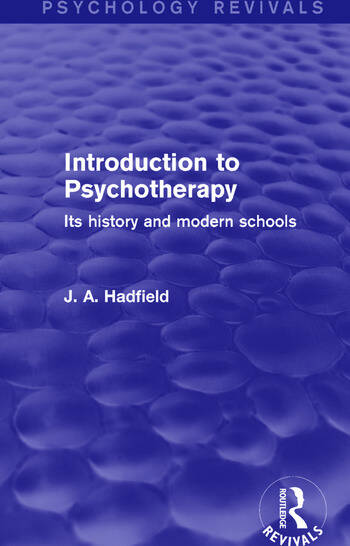 Introduction to Psychotherapy: Its History and Modern Schools

This book is intended to give the intelligent lay reader a comprehensive view of the subject of psychotherapy, the treatment of nervous disorders by mental means. These disorders are of increasing importance on account of their wide-spread nature and of the misery they produce.

It describes the development of psychotherapy as employed by the most primitive peoples and races, through animal magnetism and hypnotism to the more modern analytical schools of Freud, Jung and Adler. It sets out in particular to give the positive contributions of these various systems, although this does not preclude criticism of their weaknesses and more dubious theories.

Dr Hadfield has had the widest experience, having treated psychoneurotic disorders for over fifty years, including the war neuroses in the two world wars, both in the Navy and in the Army; and, as Lecturer in the University of London in the subject for over forty years, he has had the opportunity to systematize the knowledge thus obtained. As a result of this experience he has come to conclusions as to the nature, causes and treatment of such disorders differing somewhat from those of the established Schools, and it is these findings which are given in the latter part of the book under the title, ‘Direct Reductive Analysis’.

The book will be useful to all those – teachers and parsons as well as medicals – who have to deal with human beings and their aberrations, and to them it is addressed.