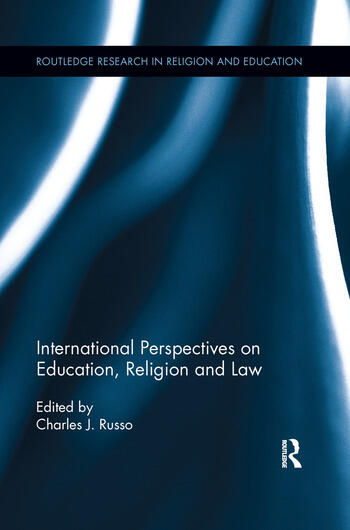 This volume examines the legal status of religion in education, both public and non-public, in the United States and seven other nations. It will stimulate further interest, research, and debate on comparative analyses on the role of religion in schools at a time when the place of religion is of vital interest in most parts of the world. This interdisciplinary volume includes chapters by leading academicians and is designed to serve as a resource for researchers and educational practitioners, providing readers with an enhanced awareness of strategies for addressing the role of religion in rapidly diversifying educational settings. There is currently a paucity of books devoted solely to the topic written for interdisciplinary and international audiences involving educators and lawyers, and this book will clarify the legal complexities and technical language among the law, education, and religion.

Charles J. Russo, J.D., Ed. D., is the Joseph Panzer Chair in Education in the School of Education and Allied Professions and Adjunct Professor in the School of Law at the University of Dayton, Ohio. Author or co-author of more than 250 articles in peer-reviewed journals, author/ editor or co-author of 51 books (most notably Reutter’s the Law of Public Education, Yearbook of Education Law, and Encyclopedias on K-12 and Higher Education Law, he has in excess of 900 publications.