Growth and Decline in the Anglican Communion
1980 to the Present 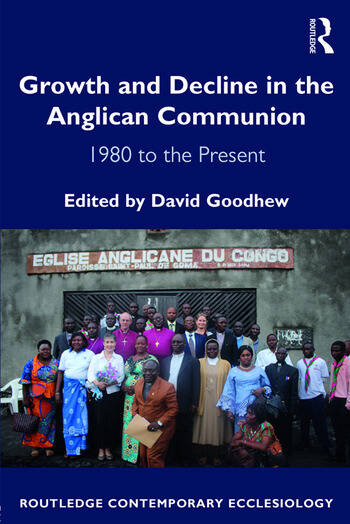 Growth and Decline in the Anglican Communion: 1980 to the Present

The Anglican Communion is one of the largest Christian denominations in the world. Growth and Decline in the Anglican Communion is the first study of its dramatic growth and decline in the years since 1980. An international team of leading researchers based across five continents provides a global overview of Anglicanism alongside twelve detailed case studies. The case studies stretch from Singapore to England, Nigeria to the USA and mostly focus on non-western Anglicanism. This book is a critical resource for students and scholars seeking an understanding of the past, present and future of the Anglican Church. More broadly, the study offers insight into debates surrounding secularisation in the contemporary world.

Revd. Dr. David Goodhew is Director of Ministerial Practice, Cranmer Hall, St John's College, Durham University, UK. Prior to Cranmer, he was a parish priest in York and before that, Chaplain and Fellow of St Catharine’s College, Cambridge. He has published widely in the fields modern British and South African history. He edited the controversial study Church Growth in Britain: 1980 to the Present (Ashgate 2012) and the volume Towards a Theology of Church Growth (Ashgate 2015).

‘This is a truly valuable book. In a collection of outstanding essays, the contributors seek to find firm ground for statements about growth and decline in the Anglican Communion, one of the world’s largest religious institutions. At every stage, what they find repeatedly challenges conventional assumptions, and also raises fundamental questions that demand to be applied to other global churches. This is truly eye-opening. I cannot speak too highly of this excellent volume.’

‘This volume is a veritable goldmine. It contains a huge amount of mostly numerical information on the Anglican Communion in all its fullness. Quite rightly it eschews easy generalizations, probing instead the complex and evolving mosaic that constitutes modern Anglicanism.  Almost every reader will be surprised about something.  I recommend this book very warmly.’

‘To be "Anglican" once meant to be Christian in a peculiarly Church of England fashion, and the extent of "Anglicanism" could be neatly mapped onto the boundaries of the British Empire or Commonwealth.  This timely and wide-ranging volume demonstrates that, happily, neither of these generalisations any longer applies.  It shows how the Anglican Communion since 1980  displays a complex narrative of rise and fall in its different parts, and now exhibits a fascinating range of variations on the historic theme of what it means to be Anglican.’

‘Numerical church growth and bolstering congregational numbers continues to preoccupy many mainline denominations in the developed world. As this important study shows, church growth is a complex and nuanced phenomena, and needs to be studied with care if it is to be understood.  David Goodhew’s continued work in this field offers new perspectives in an arena that is inherently complicated – and he brings to this a clear-sighted vision.  For all who research church growth – as theoreticians or practitioners – this major study makes a valuable contribution to a burgeoning field of enquiry that sits between missiology and ecclesiology.’

‘This deepening of the analysis of global Anglicanism is refreshing and welcome for its challenge to the popular presentation of declining North versus growing South. This nuanced approach starts outside the North/West and exhibits the range of geo-political contexts and diversity of growth patterns. In so doing it reconfigures and complicates the picture, challenges conceptions of growth and decline, questions projections of secularization, and re-shapes the future Communion.’

‘The Essays in this book invite readers to further discourse on "growth" and "decline" within the respective "Provinces" of Anglicanism in particular, and within Christianity in general. The book is worth reading as a whole, and informative in its wide range of contributions.’

, Professor of Philosophy and Religious Studies, University of Nairobi, Kenya.

‘David Goodhew and his diverse team of collaborators have produced a timely, illuminating, and comprehensive collection of essays. This landmark volume represents an essential text for students of global Christianity, as well as worldwide Anglicanism, at the turn of the twenty-first century.’

‘The two words in the title, Growth and Decline, are at the core of this book. They are not neutral, but provocative. They paint the picture of the Anglican Church from 1980 onwards, exploding from its originally historical and geographical entity as an English (later British) "thing", to a global "complexity". Originally the Church was an "island Church", but by the beginning of the twenty first Century it had acquired global ingredients, a global platform, and a global kaleidoscope.

This did not happen against a single and simple landscape. Its tendrils have embraced world languages, world cultures, world aspirations, and worldwide communication channels. Like that, the Anglican Church is paradoxically both "Anglican plus and Anglican minus", to mean Multi-Anglicanism in the twenty first century and beyond.

That being the case, we welcome and appreciate the comprehensive and challenging contribution of this book to this phenomenon of the Church and what it means. The book brings us to where the Anglicanism stands (and falls) today and tomorrow, the outcome and witness of both its internal character and external outreach rubbing shoulders, to the Glory of the Lord.’

‘…open, empirical, and nuanced. It provides very useful information, some varied interpretations, and…avoids any easy prescription for turning decline around.’

'This book deserves a wide readership. Deaneries should encourage study groups and maybe hold day conferences on it ... There is actually a great deal of material worth pondering in a book that provides a unique overview of the Anglican Communion'

'an admirable survey of the situation revealed by [a] diverse set of contributors, each with a deep knowledge of a particular region or country.'

'Growth and Decline in the Anglican Communion: 1980 to the Present provides both a big picture overview and fascinating case studies from around the world…. an extremely helpful and important means of going beyond the caricatures of church growth and decline by looking at what is actually happening around the world.'