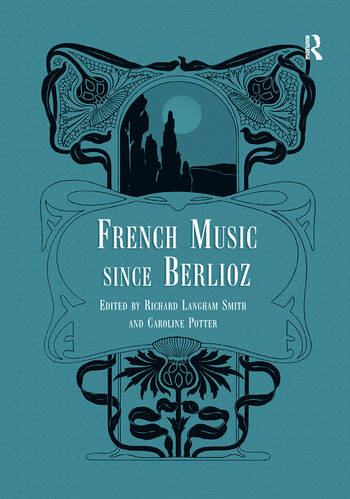 French Music Since Berlioz explores key developments in French classical music during the nineteenth and twentieth centuries. This volume draws on the expertise of a range of French music scholars who provide their own perspectives on particular aspects of the subject. Déirdre Donnellon's introduction discusses important issues and debates in French classical music of the period, highlights key figures and institutions, and provides a context for the chapters that follow. The first two of these are concerned with opera in the nineteenth and twentieth centuries respectively, addressed by Thomas Cooper for the nineteenth century and Richard Langham Smith for the twentieth. Timothy Jones's chapter follows, which assesses the French contribution to those most Germanic of genres, nineteenth-century chamber music and symphonies. The quintessentially French tradition of the nineteenth-century salon is the subject of James Ross's chapter, while the more sacred setting of Paris's most musically significant churches and the contribution of their organists is the focus of Nigel Simeone's essay. The transition from the nineteenth to the twentieth century is explored by Roy Howat through a detailed look at four leading figures of this time: Fauré, Chabrier, Debussy and Ravel. Robert Orledge follows with a later group of composers, Satie & Les Six, and examines the role of the media in promoting French music. The 1930s, and in particular the composers associated with Jeune France, are discussed by Deborah Mawer, while Caroline Potter investigates Parisian musical life during the Second World War. The book closes with two chapters that bring us to the present day. Peter O'Hagan surveys the enormous contribution to French music of Pierre Boulez, and Caroline Potter examines trends since 1945. Aimed at teachers and students of French music history, as well as performers and the inquisitive concert- and opera-goer, French Music Since Berlioz is an essential companion for anyone interested in the culture of France.

'The editors, Richard Langham Smith and Caroline Potter, have succeeded in covering the extraordinary richness and diversity of over a hundred years of French music. This period includes every type of music from Offenbach to Boulez, but all eleven contributors have a special sympathy for their particular allotments, so that justice is done to many figures who have been overlooked in our hasty consumption of the major masters. Debussy is not singled out as a solitary pioneer but placed fairly and squarely with Fauré, Chabrier and Ravel as part of a bold exploratory movement in a superb essay by Roy Howat, who writes in detail of the music without ever losing his head or the reader's attention. The 1930s, normally assumed to be barren, are brought to life by Deborah Mawer, and important recent composers, such as Dutilleux and Ohana, are sympathetically treated by Caroline Potter. James Ross's fascinating survey of the salon traces some vitally important and little explored threads in the fabric of French music. The intellectual curiosity of French audiences and critics and the extreme variety of the works they happily venerate or abhor makes French music an unusually rewarding topic for non-French writers; this team of Francophiles has uncovered many of the secrets of a brilliant repertoire without falling into the trap of imagining that there is a single characteristic that makes French music French.' Hugh Macdonald, Avis Blewett Professor of Music, Washington University, St Louis, USA 'French art music has its monstres sacrés, to be sure, but its full range and richness remain too little known and appreciated in the English-speaking world. This excellent volume is therefore most welcome. In it, an impressive team of British specialists, led by Richard Langham Smith and Caroline Potter, provides expert guidance to a vast and rewarding repertory ranging from Berlioz to Boulez and including music for the concert hall, stage, salon, and church. Not a history per se