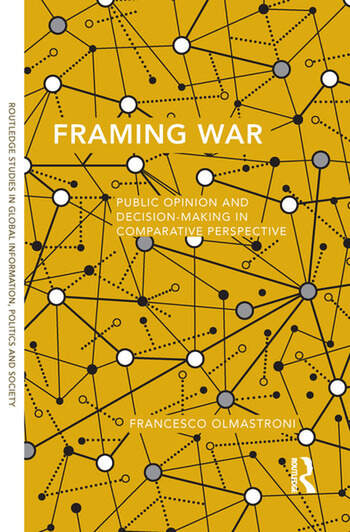 Most research on framing has focused on media and elite frames: the ways that the mass media and politicians present information about issues and events to the public. Until now, the process by which citizens’ opinions may affect the initial frame-building process has been largely ignored. The two-way flow of influence between public opinion and decision-makers has been analyzed more from a top-down than a bottom-up perspective. Olmastroni addresses this issue by introducing a cyclical model of framing. Additionally, most empirical studies on media framing have centered on the United States. Olmastroni’s text seeks to overcome this limitation of prior research by examining different types of framing in three different countries.

uses the recent war on Iraq as a case study, focusing on the elite and media framing of this event in order to examine the interaction between the political elite and the mass public in three Western democracies—France, Italy, and the US—during the early and on-going stages of the military crisis. The book analyzes whether and, potentially, the extent to which decision-makers tracked and responded to public opinion in presenting their foreign policy choices. It examines the strategies and approaches that governments potentially adopted to influence public opinion towards either the need for or the lack of need for a military intervention. By representing the framing paradigm as a cycle, Olmastroni shows how each actor within the system (i.e., government and other elites, news media, and public opinion) is linked to the others and contributes to the final representation of an issue.

In contrast with other theoretical perspectives of framing, this book states that the framing influence does not only proceed from the government to the public, but it often moves at the same level of the system, with each actor playing different roles. Olmastroni’s insights on framing are significant for researchers in international relations, political communication, public opinion, comparative politics, and political psychology, as well as policy analysts, journalists, and commentators.

Francesco Olmastroni is an assistant professor of Political Science at the University of Siena. He teaches Quantitative Methods in the PhD programme "Political Science, European Politics and International Relations" and Cultural Diplomacy and Public Diplomacy in the MA programme "Public and Cultural Diplomacy" at the University of Siena. He has been a visiting scholar at the School of Media and Public Affairs (George Washington University)..

'In Framing War, Francesco Olmastroni has captured once again the vital importance of understanding how politicians lead publics to war. In words and symbols, national leaders such as George W. Bush and Dick Cheney highlight a presumed problem; attributes causes, and then watch as seemingly inevitable and morally sanctioned violence is embraced by public opinion.'—Steven Livingston, George Washington University

'This is a comprehensive and creative study of media, public opinion and foreign policy. That it employs a comparative approach makes it just about unique in the field. The book is a major contribution to our understanding of the relationships between elites and a sometimes gullible, other times resistant public opinion— interactions influenced by news organizations that have their own interests and limitations. Deftly deploying an original conceptualization of political framing processes in response to problems such as those purportedly originating in Saddam Hussein’s Iraq, Olmastroni sheds compelling new, theory-building light on foreign policy-making and political communication.'—Robert M. Entman, author of Scandal and Silence (2012) and Shapiro Professor of Media & Public Affairs, George Washington University Robert M. Entman J.B. and M.C. Shapiro Professor School of Media and Public Affairs George Washington University

'The study presented in this book provides a solid methodological and theoretical analysis of the relation between the government, citizens, and media in the case of the Iraqi war. This book also presents the merit to analyze responsiveness in the context of foreign policy: an area of the phenomenon still under investigation.'—Danilo Di Mauro, Italian Political Science