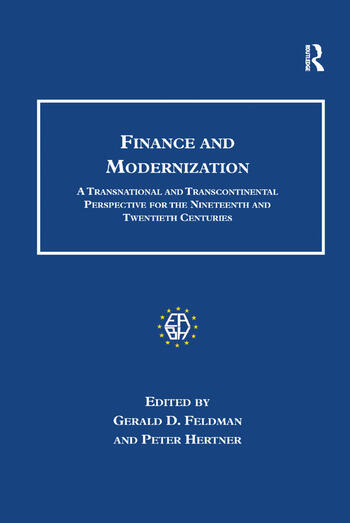 Finance and Modernization: A Transnational and Transcontinental Perspective for the Nineteenth and Twentieth Centuries

Finance and Modernization centres on a set of historical developments and problems typified by the long history of the Ã–sterreichische Creditanstalt and its successor organizations, and opens the way to compare and contrast experiences throughout Central and Western Europe and also on other continents. The structure of this volume reflects the changing role and nature of banks as economies become industrialized and modernized. Although banks adapt to the needs of an industrializing economy, at the same time, industrialization influences the manner in which banking systems grow and the structures which they adopt. Beginning with studies of the Austrian banks, their development and their crises, the volume then moves on to look at case studies of important aspects of financial activity - German stock markets, railroad investment, and information networks. This is followed by a section on country studies of banking modernization in Sweden, the Netherlands and Greece. Finally, the collection concludes with two chapters, one on banking in China and the other on banking in India, certainly both of intrinsic interest and of importance in an era of globalization. Professor Teichova, one of the great scholars in the field, concludes with reflections on the individual contributions and the general problems addressed in this book.

Contents: Introduction, Gerald D. Feldman and Peter Hertner; Part I Banking in Austria and Vienna: 'The bankers' view': Austria's economic and political development and the role of the banks, Dieter Stiefel; In the centre of Europe: Vienna as a financial hub, 1873-1913, Peter Eigner; Torn between monetary and financial stability: an analysis of selected episodes of Austrian central banking history, Aurel Schubert; Austrian banking between the 2 great depressions: the Creditenstalt from the 1870s to the 1930s, Fritz Weber. Part II Stock Markets, Railroad Finance and Information Networks: Efficiency of early German stock markets, 1836-1848, Hartmut Kiehling; The Balkan railways, international capital and banking from the end of the 19th century until the outbreak of the First World War, Peter Hertner; Modern communication: the information network of N.M. Rothschild & Sons in 19th-century Europe, Rainer Liedtke. Part III Modernization of Banking in Sweden, the Netherlands, and Greece: The emergence of joint-stock companies during the industrial breakthrough in Sweden, Oskar Broberg; The modernization of a Dutch commercial bank: the Twentsche Bank, 1858-1931, Douwe C.J. van der Werf; Success and failure of modernization in post-war Greek banking: the case of Ergasias Bank, Margarita Dritsas. Part IV The Evolution of Modern Banking in the Far East: Patriotic banking and the modernization of China: the 'Banque industrielle de Chine', 1900-1922, Frank H.H. King; 2 centuries of apex banking: the State Bank of India and the evolution of modern banking in India, Abhik Ray; Closing remarks, Alice Teichova; Bibliography; Index.

'This is a fascinating book. It is not one for reading from cover to cover. But it contains much of interest to monetary and banking historians and will stimulate much further research; and it contains invaluable lessons for contemporary central bankers.' H-Soz-u-Kult ’In all, this book forms an important contribution to financial history because of its wide-ranging studies - in method, topic and geographical area - and because it deals with finance in the wider perspective of modernization.’ Bankhistorisches Archiv