Ethics in Politics
The Rights and Obligations of Individual Political Agents 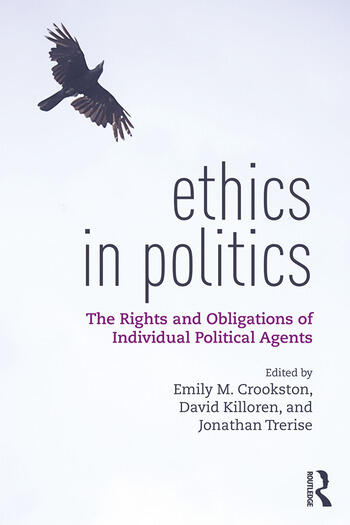 Ethics in Politics: The Rights and Obligations of Individual Political Agents

Within the field of political philosophy, the role of states, governments, and institutions has dominated research. This has led to a dearth of literature that examines what individuals—e.g., voters, lobbyists, and politicians—ought (or ought not) to do. Ethics in Politics: The Rights and Obligations of Individual Political Agents meets this need, providing a timely discussion of normative questions concerning political agents and the systems in which they act. The book contains eighteen original chapters by leading scholars which cover a range of topics including irrational voting, bribery, partisanship, and political lying. Ethics in Politics is a unique and accessible resource for students, researchers, and all interested readers, and sheds light on important but underexplored issues in ethics and political philosophy.

Part I: Lying in Politics

1. Murderers at the Ballot Box: When Politicians May Lie to Bad Voters

2. The Greatest Liar Has His Believers: The Social Epistemology of Political Lying

4. In Defense of Partisanship

5. A Defense of Senate Obstructionism

6. Conviction and Open-Mindedness: A Lesson on Political Revision from Adam Smith

7. Must We Vote for the Common Good?

8. A Demarcation Problem for Political Discourse

9. Public Reason and Its Limits

11. The Rationality of Voting and Duties of Elected Officials

12. A Defense of the Right Not to Vote

13. Expanding on the Wrongness of Bribery: The Morality of Casting a Vote

Part V: Arguing on Others’ Behalf

14. Devil’s Advocates: On the Ethics of Unjust Legal Advocacy

15. Prosecutors, Guilty Pleas, and the Consequences of a Conviction

Emily M. Crookston is Lecturer in Philosophy at Coastal Carolina University and previously held appointments at Washington University in St. Louis and UNC Chapel Hill. She specializes in political philosophy, ethics, and the history of early modern philosophy. She published “Love and (Polygamous) Marriage: A Liberal Case Against Polygamy” in the Journal of Moral Philosophy (2014) and co-edited (along with Larry May) War: Essays in Political Philosophy (2008).

is Postdoctoral Research Fellow at the Institute for Religion and Critical Enquiry at the Australian Catholic University in Melbourne, Australia. He has broad interests across moral philosophy. His current work focuses on four main topics: moral realism; moral dilemmas and their theoretical significance; animal ethics; and the ethics of charity.

is Associate Professor of Philosophy at Coastal Carolina University. He specializes in applied ethics and political philosophy, as well as ethics generally and the history of philosophy. While most of his publications are on intellectual property rights (on which he has an article forthcoming in Politics, Philosophy, and Economics, titled “The Influence of Patents on Science”), he is also working on developing a full theory of morally justified espionage.