Education and the State
International perspectives on a changing relationship 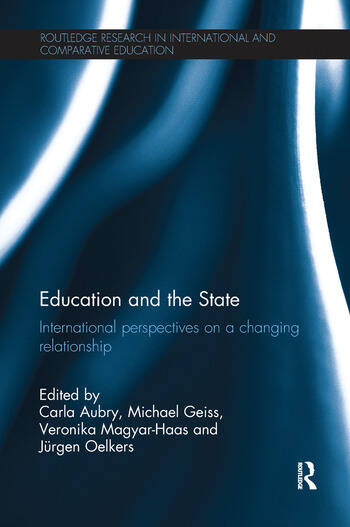 Education and the State: International perspectives on a changing relationship

In most countries in the world, school education is the business of the state. Even if forms and functions differ, the imparting of elementary knowledge is universally regarded as a public function. Yet this is neither self-evident nor self-explanatory. The degree of involvement of state agencies in the supervision, financing and organization of the school system sometimes varies so much that the usual assumption of a common understanding of ‘the state’ seems to be an illusion.

Making international comparisons and focusing strongly on the historical conditions of the current form of state education, this volume paints a nuanced picture of how the relationship between ‘education’ and ‘state’ has been and is conceptualized. Insights into this relationship are gained by considering and analysing both specific processes such as financing and bureaucracy; and conceptual ideas, for example community, authority, and political utopias. The book presents comparative studies and analyses of regional and local conditions, arguing that the history of each country or region is critical to educational success, and the relationship between the education and the state must be reconsidered, both internationally and historically, in order to be of actual conceptual value.

Education and the State

presents a broad variety of approaches and examples that provide a significant contribution to the understanding of the relationship between education and the state. It will be of key value to academics and researchers in the fields of the history of education, the politics of education, and educational administration.

Part 1: Introduction  Bringing Education Back in: International Perspectives on the Relationship between State, Culture and Society Carla Aubry, Michael Geiss, Veronika Magyar-Haas, and Jürgen Oelkers  Part 2: Comparing School Systems  The National State, the Local, and the Growth of Mass Schooling: History Lessons from England, France, and the United States Miriam Cohen  State Intervention in Backward Countries: Some Case Studies of State Education Systems in Hispanic America (ca. 1870-1920) Gabriela Ossenbach  Part 3: Financing Education  The Provision of Education and the State: From Equity to More Equality Carla Aubry  State Education, Crisis and Austerity: An Historical Analysis through the Lens of the Kondratiev Cycles Vincent Carpentier  Part 4: Educational Administration  To Write Like a Bureaucrat: Educational Administration as a Cultural Phenomenon Michael Geiss  Bureaucratizing from the Bottom up: The Centralization of School Discipline Policy in the United States Judith Kafka  The State of Education in the States: The Evolving Federal Role in American School Policy Patrick McGuinn  'Governing by Numbers': Social Work in the Age of the Regulatory State Holger Ziegler  Part 5: Power, Myths of Community, and Utopia  'Among School Children': The Churches, Politics, and Irish Schooling, 1830-1930 Deirdre Raftery  Make the Nation Safe for Mass Society: Debates about Propaganda and Education in the USA in the 20th Century Norbert Grube  Conceptualizations of Dignity and Exposure in Critiques of Community: Implications for Ethics and Educational Theory in the Work of Plessner and Nancy Veronika Magyar-Haas  'Taking the Path of Least Resistance': Expulsions from Soviet Schools in the Stalinist 1930s E. Thomas Ewing  Utopia, State, and Democracy Jürgen Oelkers

Carla Aubry is Lecturer in Education, Psychology and Didactics at Pädagogische Maturitätsschule in Kreuzlingen, Switzerland.

Michael Geiss is Researcher and Senior Lecturer in the Department of Vocational Education at the Institute of Education, University of Zurich, Switzerland.

Veronika Magyar-Haas is Researcher and Assistant Lecturer in the Department of Social Pedagogy at the Institute of Education, University of Zurich, Switzerland.

Jürgen Oelkers is Emeritus Professor of General Pedagogy at the Institute of Education, University of Zurich, Switzerland.