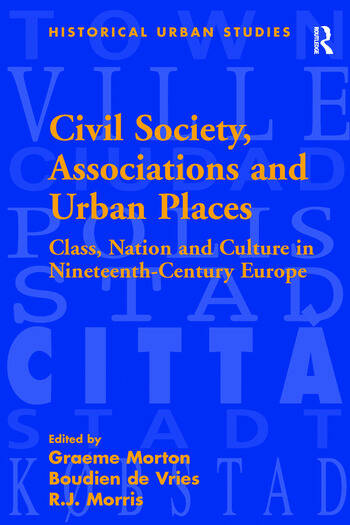 In recent years the concept of 'civil society' has become central to the historian's understanding of class, cultural and political power in the nineteenth-century town and city. Increasingly clubs and voluntary societies have been regarded as an important step in the formation of formal political parties, particularly for the working and middle classes. The result of this is the assertion that the more associations existing in a particular society, the deeper democracy becomes entrenched. In order to test this hypothesis, this volume brings together essays by an international group of urban historians who examine the construction of civil society from associational activity in the urban place. From their studies, it soon becomes clear that such simple propositions do not adequately reflect the dynamics of nineteenth-century urban society and politics. Urban associations were ideological in purpose and deliberately discriminatory and as such set the boundaries of civil society. Thus competing and segmented associations were not only an indication of pluralism and strength, but also highlighted a fundamental weakness when faced down by the interests of the state. Through a wide array of urban associations in a broad range of settings, comprising Austria and Bratislava, France and Italy, the Netherlands, Austro-Hungary, England, Scotland and the US, this volume reflects on the construction of class, nation and culture in the associations of the nineteenth-century urban place. In so doing it shows that a deep and interlocking civil society does not automatically lead to a rise in democratic activity. Expansion of the networks of urban association could equally result in greater subdivision and to the fragmentation and isolation of certain groups. Partition as much as coherence is our understanding of civil society and associations in the nineteenth-century urban place.

Contents: Introduction: Civil society, associations and urban places: class, nation and culture in 19th-century Europe, R.J. Morris; Institution-building and class formation: how 19th-century bourgeois organized, Sven Beckert; Voluntary societies and urban elites in 19th-century Naples, Daniela Luigia Caglioti; The instrumentalization of bÃ¼rgerlichkeit: associations and the middle class in Hallein, Austria from the 19th to the beginning of the 20th century, Ewald Hiebl; Middle-class identity or identities in a multi-ethnic city: associations in Bratislava in the 19th century, Elena MannovÃ¡; Internationalist networking in a multinational setting: social democratic cultural associations in Austro-Hungarian Trieste, 1900-14, Sabine Rutar; Voluntary societies in the Netherlands, 1750-1900, Boudien de Vries; In good company: class, gender and politics in The Hague's gentlemen's clubs, 1750-1900, Jan Hein Furnée; Urban associations in England and Scotland, 1750-1914: the formation of the middle class or the formation of a civil society?, R.J. Morris; The temperance movement and the urban associational ideal: Scotland, 1820s to 1840s, Irene Maver; Bourgeois citizenship and the practice of association in post-revolutionary France, Carol Harrison; Index.

’...Morton et al. have compiled a praiseworthy composition concerning human liaisons within towns and cities... Skilfully weaving together the numerous threads that help shape societies and their cultural environments, the authors should be commended for their blending a plethora of civil associations and cultural values in order to explain the connections between societies, associations and urban settlements.’ Australian Economic History Review