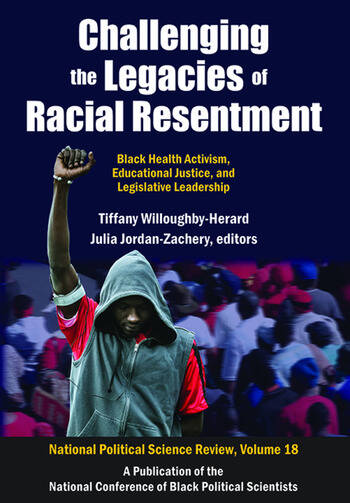 Domestic and international health activism and health policy are focal points in this volume, a publication of the National Conference of Black Political Scientists. This work demonstrates the continuing importance of the "medical civil rights movement," through examples of activism of women of colour in AIDS service organizations, of their health issues, and of the struggle for racial equity in health care in Brazil.

Spikes in police and vigilante violence, as well as fear of a reversion to resegregated schools have brought a new urgency to black political activism. The contributors explore the effect of race on American attitudes toward immigration policy and reform, black state legislators and American morality politics, the historically disproportionate influence of Southern whites in American politics, and the undermining of school desegregation laws with "nullification" strategies. The volume's Trends section features conversations on the #BlackLivesMatter movement in Los Angeles, the 2016 presidential election, and examines the teaching of the Trayvon Martin story at the University of California, Irvine. The volume also includes a diverse selection of book reviews.

Crossing the Mason Dixon versus the Rio Grande: Evaluating the Effect of Race on Attitudes toward Immigration Policy
Carley M. Shinault and Richard A.Seltzer

All but Overturned: America's Nullification of Brown v. Board of Education
Albert L. Samuels

The Limits of Emancipation: Black Americans and White Southern Dominance of American Politics from the Founding to the Twenty-First Century
Neal Allen

Black Women Take Their Health into Their Own Hands: The Het Heru Healing Dance and Auset Qigong
Francoise B. Cromer

Learning from the Doers: Women of Colour AIDS Service Organizations and Their Understanding of Intersectionality
Julia Jordan-Zachery

Trends: The Pedagogy of Black Politics "Planting the Seeds of Our Future" in Action: A Conversation with Melina Abdullah
Tommi D. Hayes

Adryan Wallace review of What's Left of Blackness: Feminisms, Transracial Solidarities, and the Politics of Belonging in Britain
by Tracy Fisher

Mary Phillips review of Radicalism at the Crossroads: African American Women Activists in the Cold War by Dayo Gore

Joe Rollins review of Letters of the Law: Race and the Fantasy of Colour-blindness in American Law by Sora Y. Han

Dan Royles review of The Calendar of Loss: Race, Sexuality, and Mourning in the Early Era of AIDS by Dagmawi Woubshet

Brooks Kirchgassner review of What Fanon Said: A Philosophical Introduction to His Life and Thought by Lewis R. Gordon

Jasmin A. Young review of Sojourning for Freedom: Black Women, American Communism, and the Making of Black Left Feminism by
Erik S. McDuffie

Christopher Cameron review of At the Cross: Race, Religion, and Citizenship in the Politics of the Death Penalty
by Melynda J. Price

A Note on Passing: Cedric Robinson

A Note on Passing: Savannah Carroll

A Note on Passing: Otis Madison

A Note on Passing: Jerry Watts

A Note on Passing: Michael Mitchell

Invitation to the Scholarly Community