Centres and Peripheries in Banking
The Historical Development of Financial Markets 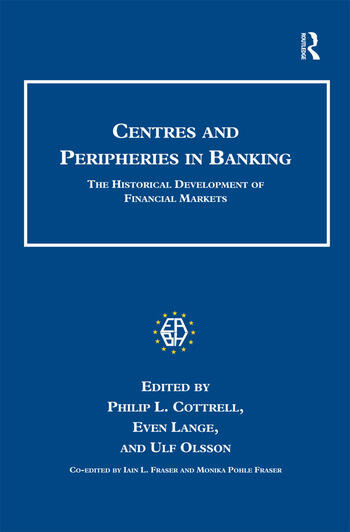 Centres and Peripheries in Banking: The Historical Development of Financial Markets

This volume presents a broad investigation into the relationship between the centre and the periphery in banking. Focusing on the historical development of financial markets, from their emergence in the early modern period to today's global financial and capital markets, the chapters investigate how local, national and international relationships have affected and helped shape the banking industry over three-hundred years. This wide-ranging discussion in time and place is provided by a group of international experts, encompassing bankers, economists, economic historians and historians, and will be of interest to all those with a scholarly or professional interest in the development of financial institutions.

Contents: Introduction; Part I Global Centres and Networks: Trade and finance in the Great War. German banks and neutral Scandinavia 1914-1918, Boris Barth; From the Levant to the City of London: mercantile credit in the Greek international commercial networks of the 18th and 19th centuries, Maria-Christina Chatziioannou and Gelina Harlaftis; The City of London as a global financial centre, 1880-1939: finance, foreign exchange, and the First World War, Ranald C Michie; The rise of Hong Kong and Tokyo as international financial centres after 1950, Catherine R. Schenk. Part II Banks as Integrators: Between the dollar-sterling gold points: USA and Britain, 1791-1914, Lawrence H Officer; The confidence in a new currency: the introduction of the Mark in Germany 1871-1876, Dieter Lindenlaub; The Banque de France and the emergence of a national financial market in France during the 19th century, Alain Plessis; Capital movements, exchange rates and market integration: the Baltic area 1850-1913, Lennart SchÃ¶n. Part III The Role of Banks in Mercantile and Industrial Credit: Personal and impersonal exchange. The role of reputation in banking: some evidence from the 19th and early 20th century banks' archives, Monika Pohle Fraser; The political economy of commercial banking in Sweden: a bird's-eye view of the relations between industry and banking over 150 years, Ulf Olsson and Jan JÃ¶rnmark; Merchants and credit in the Southern and Eastern Baltic areas, 1500-1800, Michael North; Lender of last resort in a peripheral economy with a fixed exchange rate: financial crises and monetary policy in Sweden under the Silver and Gold Standards, 1834-1913, Anders Ã–gren. Part IV Bank Archives and History: The archives of a German commercial bank as a mirror of time, Reinhard Frost; Preservation of electronic information: a case study of the information systems department at Svenska Handelsbanken, Anastasia Victorsson; Using history and storytelling in mergers and branding,

’This collection contains something for everyone with an interest in financial history.’ Australian Economic History Review